Seeing a lot of games going crazy. Four touchdowns in the Alabama - Tennessee in the first quarter…and three of them belong to Tennessee.

We got us a track meet at Rocky Top today.

The new coaching staff has Colorad9 playing inspired football. They just beat Cal 20/13 in overtime - Cal was a 15.5 point favorite Buff’s defense is light years ahead of where it was two weeks ago.

Crazy warm…it was 72 degrees at kickoff in Seattle.

Bama v UT is a wild game for sure.

Arkansas bringing the hurt in Provo. Hogs win 52 - 35 in a track meet game.

Arizona is hanging with Washington today.

Good start to the UF v LSU game…hope it works out tonight. odd stuff when we play the corn dogs

Arizona is hanging with Washington today.

Yeah, they don’t look too bad doing so either - it’s looking like the only thing close to a gimme left on our schedule is Furd.

Lol. 17 penalties for 130 yards. This team is silly and unserious. We got two more losses in us this year.

That last Bama PI was pretty iffy to me to be honest.

That last Bama PI was pretty iffy to me to be honest.

I’m more upset at the “what is targeting” type calls not called on Bryce. He had about three times his brain sloshed.

it’s looking like the only thing close to a gimme left on our schedule is Furd.

Stanford 10-0 over ND at the half, and we all know how Utah is doing, so, apparently ZERO gimmes on the schedule the remainder of this year

EDIT: to ask, is it bad form to reply to you own post? (sort of seems like it…)

This article is by Chuck Culpepper (a fine writer and journalist) about the wacky goings on in college football yesterday. Includes photos and several mentions of Kincaid and Rising.

Tennessee, TCU and Utah came back to win and all that’s left are the tears

He wept, and he stood for another entire, bent day.

As big No. 86, Dalton Kincaid, wept briefly for all and the TV cameras to see, he reminded how life improves when 6-foot-4, 240-pound tight ends find the weeping too much to stem. He reminded how previous generations might have been too frail to weep, too fearful of the potential appraisal of others. Most of all, he reminded how in this kookiest concoction of a sport, a sport relentless in the senseless, some Saturdays tear through all the emotions, all the way from the 43-40 in Fort Worth through the 52-49 in Knoxville to the 43-42 in Salt Lake City, until the only choice left is the happy weeping.

“You could see the swarm of orange coming down,” the second-year Tennessee coach Josh Heupel had said 1,500 miles east-southeast, having just coached a mad, mad, mad, mad victory over No. 3 Alabama that upheld one of the weirdest tenets of a sport stuffed with them. In a sport of kingdoms that beat their neighbors habitually, sometimes, just sometimes, there’s value in having lost 15 straight times to a neighbor you detest, as Tennessee had to Alabama. Sometimes, just maybe sometimes, there’s even a hint of value in having gone outscored a harrowing 589-201 in those 15 annual alleged games with their hollowed second halves.

Sometimes, there comes that day when the depths of the dejection seem to fuel the heights of the reprieve, as if the heights might sag without the depths.

It happened in Ann Arbor last November, when Michigan finally took a brute solution to its Ohio State problem after going 2-17 through the dour new century. It happened in Lawrence in 2005 when Kansas finally stemmed the 36 straight losses to Nebraska, and in Gainesville in 2018 when Kentucky finally stopped 31 straight losses to Florida, and in Philadelphia in 2015 when Temple finally halted 31 straight losses to Penn State (hooray for Matt Rhule), and in Charlottesville in 1990 when Virginia improved to 1-29 against Clemson (hooray for Shawn Moore and Herman Moore and the late George Welsh).

Even a rare win without a gigantic streak will do it, as in Oxford Square in early October 2014 when Ole Miss finally solved Alabama, as it does only every so often.

Now it came to that forgotten old bygone powerhouse Tennessee (6-0), in a year too breakthrough to believe and a 52-49 game too chockablock to comprehend even if comprehending is precisely what they’ll do for decades onward. Now the goal post chunks left the stadium to romp around town to the Tennessee River and other whereabouts, even if they did not get up and do this themselves. Now a guy who just turned 20 three weeks ago and who caught 207 yards and five touchdowns worth of passes with huge play after huge play, Jalin Hyatt, speaks for a long-starved Vol Nation when he says, “This is what we needed.”

The Alabama kingdom made 17 penalties and other, less common blunders. The Alabama kingdom showed its otherworldly composure in rebounding from a 28-10 deficit in front of 101,915 mostly hostile. The Alabama kingdom displayed another great king, quarterback Bryce Young, a player of astonishing skill and smarts. And the Alabama kingdom finally got some turnovers after halftime — the first interception of the entire season from the soaring Hendon Hooker, and a daffy little 11-yard scoop-and-score that provided a 49-42 lead with 7:49 left.

Yet Alabama couldn’t manage the last-minute clock in a 49-49 tie, and a long field goal strayed right, and Hooker threw 18 yards to Ramel Keyton and 27 yards to Bru McCoy, and two seconds remained, and Chase McGrath’s 40-yard field goal whirred through sideways, and Tennessee had mastered the key sports art of forgetting. It had epitomized a method the coach and players kept bringing up for when things go wrong, maybe even a method we all can deploy in life: “Wipe the play.”

If you can’t wipe the past 15 years, maybe you can lend them some meaning in one season of fresh awakening, with the traditional walk to the stadium itself “unlike anything I could have ever imagined,” as Heupel said, “the sea when I turned left with my kids was, I mean, so deep.” Maybe you can make the wretched 15 almost worthwhile — almost! — with one night you’ll never forget, with further good days coming, with anticipation throbbing for Nov. 5, at a visit to No. 1 Georgia, all of it so alive just as the goal posts beginning to wobble and budge.

And surely across the mad country, at just about the time the goal posts start walking, there can be someone like Max Duggan sitting at No. 13 TCU in Fort Worth saying, “I love this place. I love the school. I love the city. I love this program. And to be involved like that with a big win like that, get the fans in there (on the field), coaches are happy, players are happy, it’s a one-of-a-kind feeling.”

And it goes to show that sometimes out there, after staying in one place for four lightly noticed seasons, after the 973 passes and the 588 completions and the 57 touchdowns and the 21 interceptions, there’s a day out there. There’s a TCU unbeaten but down 30-16 against No. 8 Oklahoma State, and there come drives of 47 and 94 yards with no third downs in either drive, and there come two overtimes and a 43-40 win on Kendre Miller’s closing 2-yard scoring burst after six tidy plays without a third down there either.

And then, as if the brain hasn’t gone bogged down enough while barely even considering how Syracuse is 6-0 for the first time since 1987, there’s nightfall and this other thing going on in Utah, with the No. 20 Utes pipping No. 7 Southern California, 43-42, with 48 seconds left, with quarterback Cameron Rising navigating around bigger people to score the closing two-point conversion after also scoring the closing touchdown, his third rushing alongside two passing.

So the Lincoln Riley Trojans (6-1) finally lose, and the fans finally storm, and even the second-most-tenured coach in the country, the measured old young man Kyle Whittingham, reckons it “has to go down as one of the most exciting games in Rice-Eccles Stadium history.” And at the end of all of it, the tight end tells reporters of his 16 catches, “It was pretty fun,” having finished his worthy weep that spoke for another whole damned Saturday.

Yeah. It’s been a good run. Alabama’s dynasty is over, again.

Alabama Dynasty over? Hardly. Winning on the road against a good team is very hard in college football, even if you are also good. I don’t weep for Bama, Tennessee loses in Athens and the SEC East is wide open.

This my “again.” Every year we lose a game they write the obituary. Alabama just needs to run the table in the west and they still make SEC Title game. We all know the conf champ is getting in. I think this season has a ton of parity. Alabama is super talented but very young and green.

Dart made a great choice and Kiffin has proven his being written off as a HC was premature. The guy is still in his 40s. It’s wild how long he’s been around and still virtually a young coach.

… And then, as if the brain hasn’t gone bogged down enough while barely even considering how Syracuse is 6-0 for the first time since 1987, there’s nightfall and this other thing going on in Utah, with the No. 20 Utes pipping No. 7 Southern California, 43-42, with 48 seconds left, with quarterback Cameron Rising navigating around bigger people to score the closing two-point conversion after also scoring the closing touchdown, his third rushing alongside two passing.

Syracuse and Utah in the same paragraph. I am satisfied.

I get rushing the field but that Hillbilly fanbase is taking the field home with them. Mama gone got the Wal Marts or Hobby Lobby and make a shadow box for her turf. 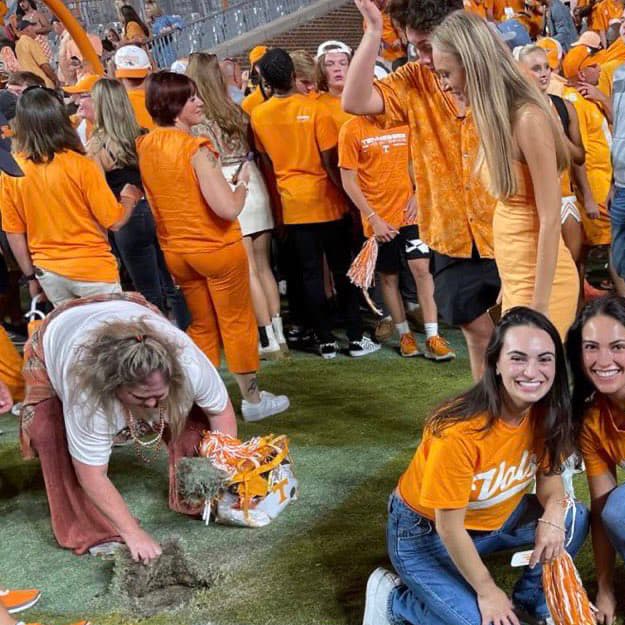 That is some really dumb ■■■■. That team still has games to play on that field. Now they will have a screwed up spot in it.