UCLA going to the B10 is a travesty 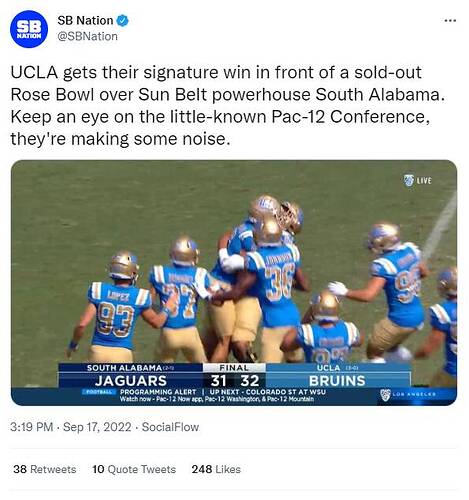 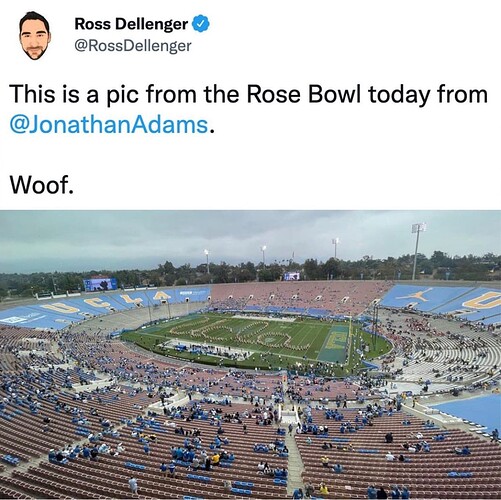 We had more “travel fans” in the Rose Bowl in 2006 for our game there than they had “fans.”

I can see why Kliavkoff is being collegial…they will be coming back.

I have said this all along. The travel, the cost of travel, and being continually pummeled in the B1G will get old real fast. And USC will compete but not dominate the B1G, UCLA will get hammered. Have fun with that.

Paid attendance in the Rose Bowl was reportedly 27K last weekend. Maybe UCLA can move their home games to Carson (where SDSU played while building their new stadium) so it looks somewhat full.

I love Bill Walton and think he’s a lot more articulate and informed than some might give him credit. The guy is a true renaissance man and to me, that’s what college is for; to bring to previously unknown worlds’ to students and for well prepared, professional students to help go forth and improve the world - because of their alma mater. Not because the football team ditched to a “bigger” conference. Whatever that means.

I like Walton. He’s very well read and it shows. He’s willing to learn something new instead of being convinced nobody can change his opinion.

I like what he said here. It makes me think of what David Shaw said right after the move was announced. He said something to the affect that he thinks in a few years the PAC will be back together in some capacity. I don’t know if that will happen but I hope so.

I think USCLA will struggle in the B1G. USC will no longer be the king of the conference with NIL money. That sense of entitlement they cram down everyone’s throats will be crammed down their throats by Ohio State, Michigan and Penn State. I hope to see them both have to travel to the Midwest in late November every year, that will be fun to watch.

But seeing San Diego State and/or UNLV play in SLC as your conference mate will be fun to watch too.

When was the last time a Southern Cal fan didn’t sound snotty?

But seeing San Diego State and/or UNLV play in SLC as your conference mate will be fun to watch too.

without sounding snotty ? LOL It’s in your name University of Snotty Children

seeing San Diego State and/or UNLV play in SLC as your conference mate will be fun to watch too.

OK. Answer me this: What has Utah done to deserve any USC fan’s schadenfreude in the wake of USC’s decision to leave? Your post sounds like “Take that, peasants!”

Me love you long time. I congratulate every time you beat us. I also contributed after I was banned in 2020 just cuz I thought I should for time spent.

I read tons of smack here about my Alma mater - understandably - cuz it’s your board. Ute Brave’s post happened to rub me the wrong way.

I’m posting this because it has a comment section which I always find interesting. Seems the majority support Bill or resign themselves to the money grabing SOTT. 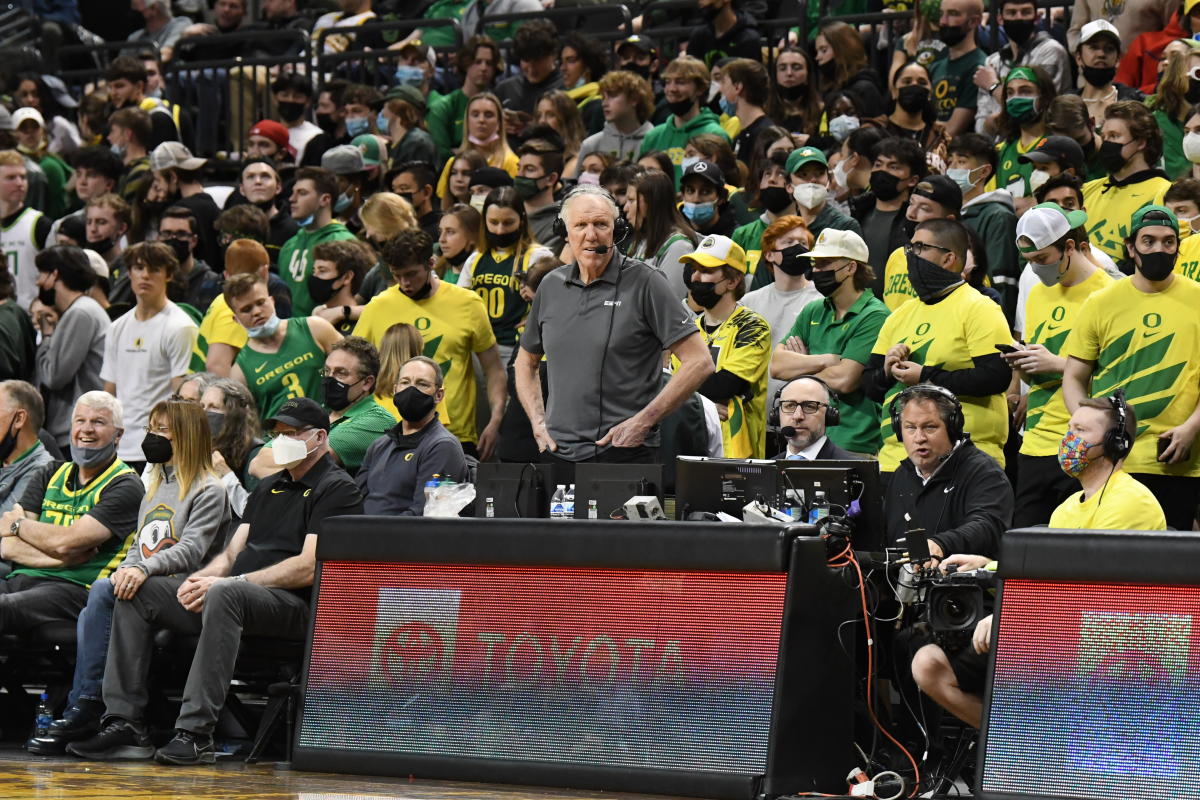 "I don't believe that joining the Big Ten is in the best interest of UCLA," Walton said.

Bill is right in the case of UCLA. It is all about the money. A massive media rights contract allows the school to avoid having a really tough funding discussion with the University of California Board of Trustees, the State Assembly, and the Governor. Given the school’s athletic department losses (much of it due to COVID and capital project cost overruns) I believe their AD thinks he found a way to start filling the hole without going through the bureaucratic hurdles. The reality is Bill Walton is right - the money won’t cover the increased costs of travel, impacts to student studies, and the sustainability mission of the UCBOT. As a public university, UCLA has to follow process and make their case. They haven’t.

U$C, being a private university can do whatever it wants within the University’s rules. Just remember the amount of “seat cushion money” they have paid out to football coaches they have fired. At many of the Universities in the conference, those costs would have been a major blow to their athletics budget. U$C just shrugged them off. They are not bound by the same processes of UCLA. Later on they may find all that glitters is not gold-pressed latinum, being an “also-ran” in the new home, and letting the new home totally bogart on their history and cachet, maybe they change their minds and come back. Remember the grass is always greener over the septic tank. Right now, they want some of that green grass.

It is all about the money.

No, no! Haven’t you been watching? The UCLA brass have all said it’s about the athletes.

Your cynicism is unbecoming. (But you’re absolutely right.)

Hang with us, your input’s valued, you’re part of this mangy collection of goofs.

All good-natured kidding aside, for Greg and other USC fans, I’ll just say that when they first announced Utah was headed to the PAC, while I looked forward to games against Oregon, Washington, Stanford, UCLA, and others, I was most excited that we would be facing USC every year because of their tradition.

And the last dozen years, we’ve had more great games, both wins and losses, against USC (including the very first game in the Coliseum where Utah had a potential tying FG blocked on the very last play of the game) than anyone else in the PAC. Will very much miss having them on our schedule. 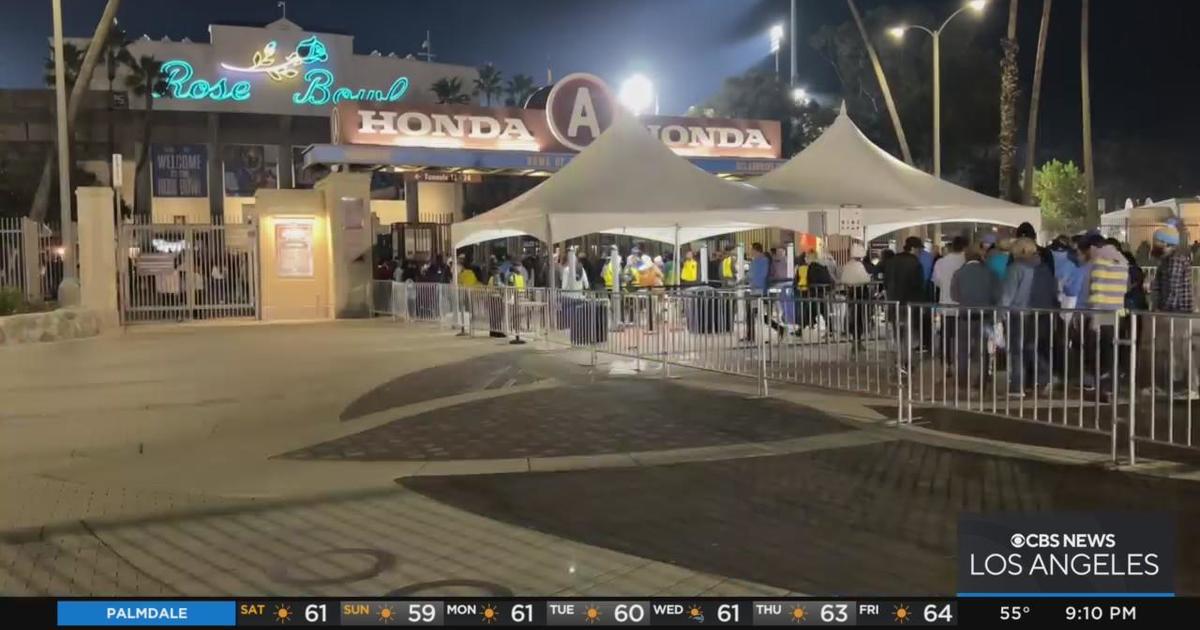 UCLA football having excellent season but with Rose Bowl half empty

Attendance has been down for UCLA football for quite some time but this year's lack of attendance has been more glaring considering how well the Bruins are playing. CBSLA Reporter Laurie Perez has more from the iconic Rose Bowl.