It’s been shocking to me he’s coached at all since the accusations came out. Need to gut the whole AZ program.

No kidding. Says as much or more about UA than it does about Miller.

If the NCAA lowered the boom on Miller and UA, they could at least give the impression that their rules and ethics are more than just a huge sham.

As it stands now, the NCAA has zero credibility and it’s driving fans away from the game. I’d ague that it’s the long-term loyal fans they are losing too, since the casual observer probably doesn’t pay much attention to these stories.

I will believe it when I see it. Although maybe HBO is more of a driving force than the FBI. 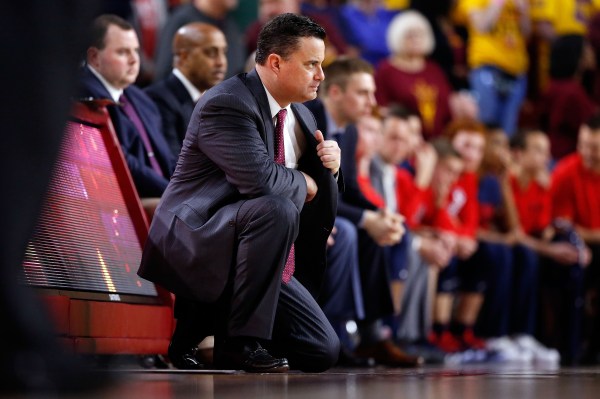 HBO documentary on the basketball scandal isn’t a bad look for Arizona, but...

The audio of Miller’s conversations with Christian Dawkins make it clear just how deeply immersed the Arizona program was in college basketball’s underworld.

Per the NCAA this issue will be a moot point “on or before Jan 2021” when D-I basketball, football, and the like, all will be able to receive payments.

U of A will only care if this makes them look bad. They know Miller is cheating and they don’t care unless it becomes pubic. Cheating scums.

The last time the AZ basketball team played at the Huntsman Center, during a timeout, the student section chanted, “U of Pay”, for most of the timeout. When Miller emerged from the huddle at the end of the timeout, he stood, sanctimoniously staring at the students, like some sort of wrongly accused victim.

I remember thinking, one of two things applied, either:

Per the NCAA this issue will be a moot point “on or before Jan 2021” when D-I basketball, football, and the like, all will be able to receive payments.

In reality, it’'s NOT a moot point, because they were paying players when it was expressly forbidden. The NCAA is an absolute sham.

I finally saw “The Scheme” last night. Like many others, I was a bit disappointed there wasn’t more meat in it. The show only interviewed 5 (?) people, Dawkins, his parents, his lawyer, and a writer. None of the other principals would participate (FBI, NCAA, coaches, prosecutors, etc.).

Dawkins comes across as a crook. A young, naive, well intentioned crook, but still a crook.

The show was limited to the trial evidence and public record, since none of the head coaches went to trial. I think the assistants charged with crimes all pleaded guilty or made deals so there were no trials, so no more evidence in the public record. Makes it clear the FBI is sitting on a LOT more wiretap and video info.

Despite this (so far successful) effort to bury most of the evidence, the released wiretap evidence is VERY damning. IIRC Miller and Wade (LSU) are on tape bragging about paying players, and should be immediately fired. Maybe others too.

Sure all fired and all crooked if you buy the premise that the system is just in first place. Everyone that bucks an unjust system is a criminal by definition.

Sources: Arizona's long-awaited NCAA Notice of Allegations expected to arrive today. How harsh will it be? bit.ly/34kuDIT
1 Like
bopahull October 22, 2020, 7:32pm #14

Grand Canyon College will get the death penalty.

Was reading some of the twitter feed. No one seems concerned for Arizona or Miller. So, you may be correct on someone else receiving a penalty, you know to teach Arizona and Miller a lesson.

I don’t understand why the UofA doesn’t see itself as better than Sean Miller?

I don’t understand why the UofA doesn’t see itself as better than Sean Miller?

I was taught long ago: When otherwise rational people behave in ways you can’t explain, follow the money. I’m guessing that lots of powerful people with money support him, and money talks.

I don’t buy that. They just want to win. The moment they think Miller is hurting them more than helping them, he’ll be gone. But zona is still recruiting very well. They just signed another blue chipper this week. Miller is safe until that well dries up.

U of A and/or Miller just found other ways to pay recruits, to avoid detection. The NCAA could go for broke if they wanted to, but they don’t want to so there will be a slap on the wrist and it will be swept under the rug.

Remember Larry’s comment when he lost that Utah kid to U of A? Something about ‘at least we’re not paying recruits’.

Miller was on tape talking about paying the best recruit in the nation, who ended up at Arizona, and nothing will come of it.