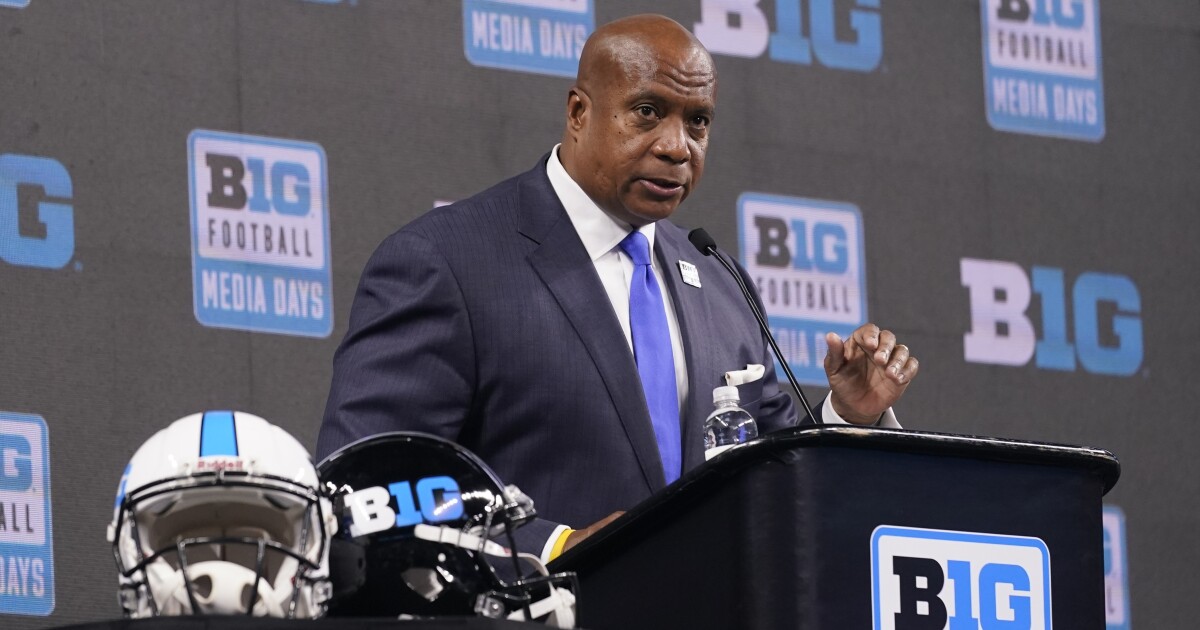 The Big Ten's new TV agreement with Fox, CBS and NBC is worth nearly $8 billion. It will liberate USC and UCLA from after-dark kickoffs. 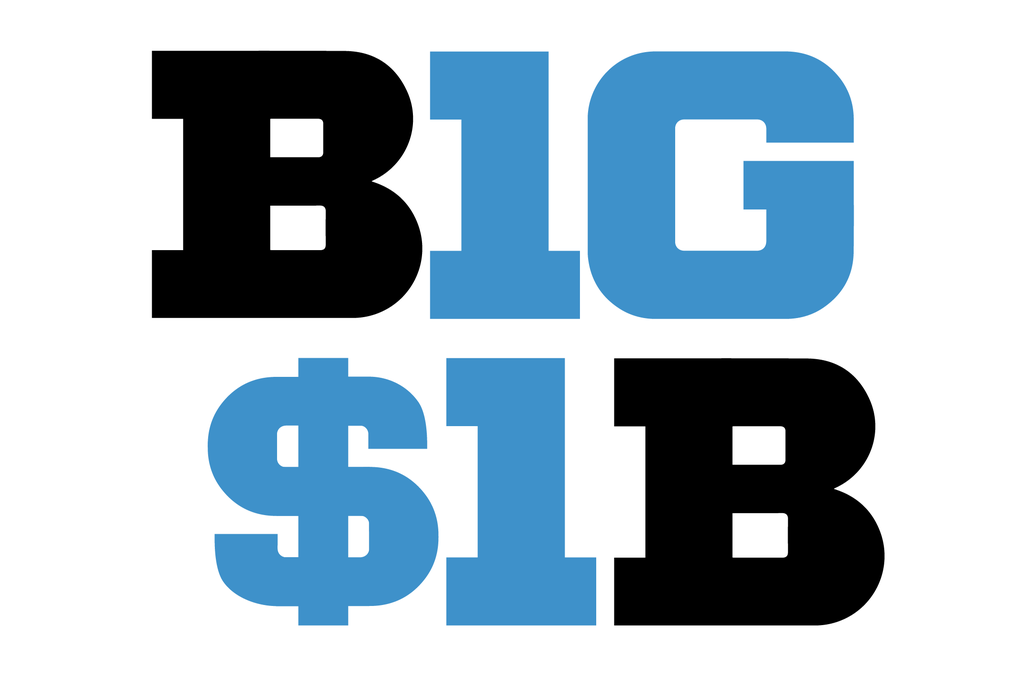 The agreement splits the Big Ten’s sports between Fox, NBC and CBS, and is the richest annual deal for any college sports league.

Not a surprise. The only surprise was ESPN walking away from the table.

That move could actually benefit the PAC and others.

Here is an excerpt from the Wall Street Journal story. It will make you all feel grateful for what the Big Ten and those TV networks are doing for all college football fans. Well, I should say, for fans of the few schools in the Big Ten and the SEC. We should all be grateful to them.

The Big Ten on Thursday struck a massive new seven-year contract with Fox, CBS and NBC that people familiar with the matter said is worth up to approximately $7.5 billion, catapulting the conference to the front of a cash-driven race for domination among a dwindling number of top college conferences.

The Big Ten’s contract is the richest ever for a college athletic conference and the latest landmark in an era in which the surging value of college football’s broadcast rights have redefined and reshaped the sport. Whereas a group of five top athletic conferences recently ruled college football’s airwaves, that number has narrowed to two: the Big Ten and the Southeastern Conference.

The Big Ten has separated itself from other leagues in part by expanding the geographic reach of the conference to add one of the nation’s top media markets. Less than two months ago, the Big Ten announced it had landed Southern California and UCLA as future members, shocking the sports world by expanding the Midwest-based conference to the West Coast and driving up the bidding to telecast Big Ten games.

The SEC did something similar last year, announcing it was adding football behemoths Texas and Oklahoma by 2025. In 2024, when the SEC’s new deal with Walt Disney Co.’s ESPN takes effect, the conference will generate more than $800 million annually in media rights, according to a person familiar with the matter. That number stands to increase again after the new teams join.

The Big Ten and SEC each will have 16 member schools once their current expansion plans take effect. The conferences’ growing size and star power—with most of the most-watched football teams among them—are further separating them from their competitors.

The Atlantic Coast Conference’s media revenue from ESPN and ACC Network was $397 million in 2020-21, according to federal tax records. The Pac-12 and Big 12 Conferences are even further behind and their current contracts do not expire until 2024 and 2025, respectively.

The Big Ten deal comes two years after Kevin Warren, a longtime former executive with the Minnesota Vikings, took over as commissioner, and it reflects a more NFL-like approach by spreading Big Ten football and basketball games among several media partners instead of one or two: three major networks and NBC’s streaming platform, Peacock, plus the Big Ten Network. It’s a contrast to the SEC’s new deal, which will put all of its premium football games on Disney-owned properties and relies heavily on cable through ESPN’s channels.

“I believe in the power of our network television partners, but it has a nice balance of direct to consumer delivery of inventory in the deal,” Warren said in an interview on Thursday. “There’s even a higher degree of cross marketing. When you look at the other properties that Fox, CBS [and] NBC have, those are all the biggest events.”

This new deal marks a fresh chapter in the longstanding relationship between the Fox Corp.’s Fox Sports and the Big Ten, one that began in 2007 when the Big Ten Network became the first conference-specific television platform in a joint partnership with Fox. In addition to upping its 51% stake in the Big Ten Network to 61% in 2021, Fox was heavily involved in the bidding process as the conference looked to make a new deal, going so far as to have network representatives in the room listening to pitches from rivals alongside Warren…. 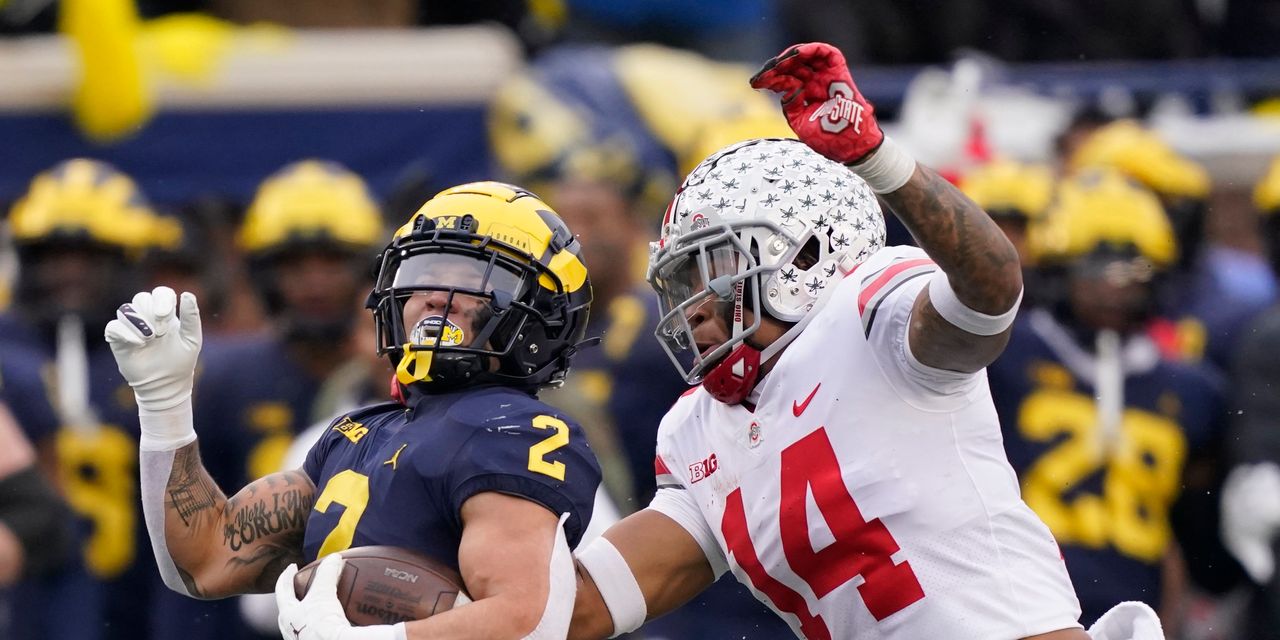 The conference’s partnership with Fox, CBS and NBC represents an NFL-style approach to spreading its content across multiple platforms

I will consciously avoid watching any of these games in the future. I will not subscribe to any direct streaming service of these games. It’s only symbolic but I’m not going to patronize these greedy bastards.

Will be interesting to see how the big 10 sets up divisions or pods. Are usc and ucla fans going to get a steady diet of Nebraska Iowa Minnesota northwestern Illinois? How often will they play osu UM, penn st? giving up their 100 year traditional rivals for that?

Not bad for a team that won only 4 games last year.

Will be interesting to see how the big 10 sets up divisions or pods. Are usc and ucla fans going to get a steady diet of Nebraska Iowa Minnesota northwestern Illinois? How often will they play osu UM, penn st? giving up their 100 year traditional rivals for that?

These numbers are approaching hard to fathom. At what point does it become enough? I know the answer-- never, but I think you understand my point. When will “college” football finally admit that it is a minor league, and remove itself from the Universities, except for naming purposes?

Anyway, I’m feeling a bit grumpy today, and this news just adds to it. So, take my mini rant FWIW.

This is enough money to sell your family out.

Are you sure you are not a Utahn? This is a very Utahn-like behavior. LOL 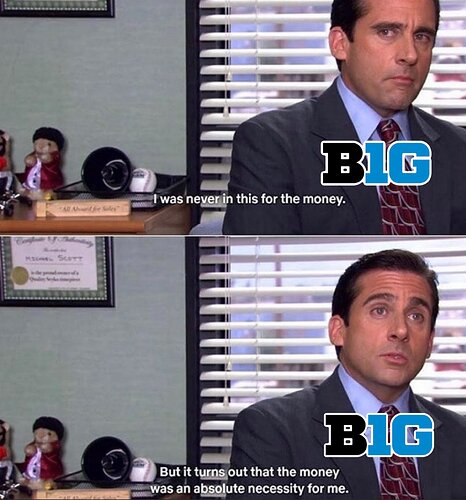 Rutgers, Indiana, and Purdue are like trust fund kids. They didn’t do anything to inherit their wealth, but are wealthy just the same.

I wonder the media partners feel they can fund this contract through normal advertising, or if they will be couniting on developing revenue through subscriptions or pay-per-stream.

To be fair, one delivers NYC, one is a Basketball Power and another is a pseudo-Basketball power and is known to upset Ohio State from time to time. Before you mention Maryland or Northwestern, DC and Chicago markets.

I’ve never understood this mentality. USC won’t be paying you any of that TV money. They aren’t going to lower ticket prices either.

To be fair, one delivers NYC, . . . Before you mention Maryland or Northwestern, DC and Chicago markets.

But do they, really? How many of the millions in those population centers really care about those teams? I bet a quick look at attendance figures would be telling.

I’ve never understood this mentality. USC won’t be paying you any of that TV money. They aren’t going to lower ticket prices either.

I would like to get a look at the athletic department budgets for the B1G schools for the next 5 years. What are their plans for all this new dough they are going to be raking in? Hard to understand how anyone could be operating with a deficit if they have that much coming in.

How many more athletic facility edifices can they build? Do they just plan to tear them down and rebuild bigger and better every 10 years? Kind of like the Las Vegas philosophy with casinos? And how many more multi-generational wealth contracts can they award to mediocre coaches? I don’t envy the athletic directors with the task of trying to figure out where to spend all these new found riches.

But do they, really? How many of the millions in those population centers really care about those teams? I bet a quick look at attendance figures would be telling.

I think it gets you more in the local press. BUT, almost every school has a decent fanbase in large metros. There is always an Alabama bar (The Houndstooth) even in Chicago.

Kind of hard imagining bama fans mixing it up in the Windy City. “Da Crimson Tide” doesn’t really roll off the tongue. 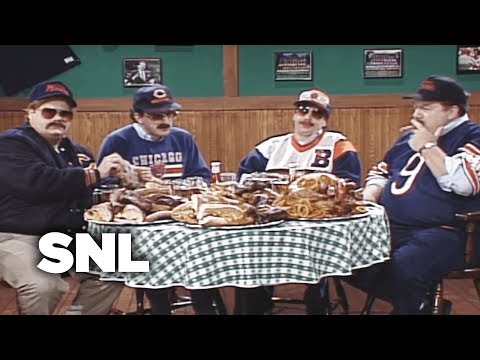 Kind of hard imagining bama fans mixing it up in the Windy City. “Da Crimson Tide” doesn’t really roll off the tongue.

Oddly, half of my Dad’s side are in Chicago or Detroit with homes back in Alabama. I-65 is an easy drive. Alabama pulls a ton of kids from the Midwest and New England recently.

Do you think there’s a chance the B1G goes after UW, OU, Cal & Stanford or are they done with adding PAC teams? My hunch is those four will be added now that ND appears to have turned them down.