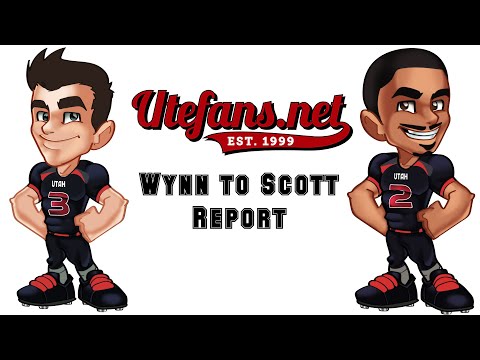 Great postgame show tonight with Kenneth and Jordan. They spent a minute or two talking about Coach Whitt towards the end which was really neat to hear. “Plan to Wynn” is coming up tomorrow.

I thought Wynn was hired a few years ago and was on the football staff. Is that no longer the case?

Great postgame show tonight with Kenneth and Jordan. They spent a minute or two talking about Coach Whitt towards the end which was really neat to hear. “Plan to Wynn” is coming up tomorrow.

Great show!
Jordan, Kenneth thanks so much for your playmanship and ongoing contributions to the Utes.
@Steggys_Mixtapes for the inspiration and impetus you bring to Utefans.net

Great work. I could listen to K.Scott all day. Dude is super positive.

I really appreciated how they described the culture & how Whit has built the program.

Back when I was going to practice 3-4 times a week during '03-04, it really was like we had two head coaches: Urban headed up the offense and handled the PR duties, and there was no question Whit was the head coach of the defense. He had that level of credibility on the practice field, definitely equal to Meyer, with Meyer being the guy who gave end of practice speeches.

Urban was a genius at PR and getting the MUSS motivated, etc, and those 2 teams laid it out, but when Whit was named HC I had zero doubt he’d make a great head coach. There’s always some lessons to be learned when you’re new to the position, and perfection doesn’t exist, but it’s really nice to hear the players describe the culture Whit built.

This it wonderful stuff Wynn, Scott (and Steggy).

I particularly loved the comments about special teams and the recognition that the team was going for the block on that punt right before the half; when that failed they immediately setup for the return, and were well coached to the point that there where good blocks, none in the back.