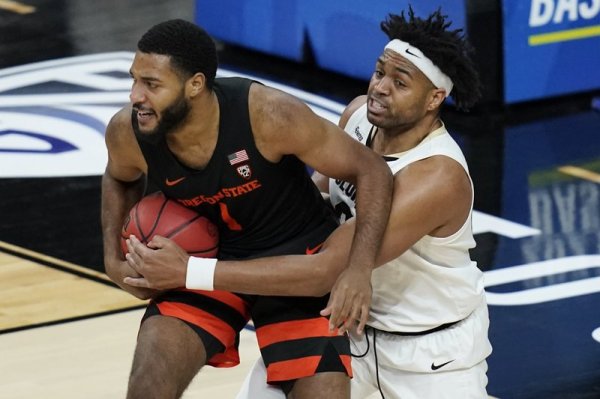 The Beavers beat No. 4 seed UCLA, No. 1 Oregon and No. 3 Colorado to claim their first NCAA berth since 2016 and improve the Pac-12’s prospects for Selection Sunday.

The regular season is over. Will the firing season begin?

Three coaches are on fragile ground: Arizona’s Sean Miller has issues beyond his on-court performance, while the continued employment of two others, Utah’s Larry Krystkowiak and Stanford’s Jerod Haase, is tied directly to wins and losses.

We addressed Miller’s situation earlier in the week, and resolution is pending.

But what of the others? Will Krystkowiak and Haase get fired? Should they get fired?

Our guess is that he won’t be dismissed by the Utes.

Our opinion is that he should not.

The Utes need to hold firm for one more year, for a variety of reasons.

One is the pandemic: the athletic department’s $30 million deficit; Krystkowiak’s huge buyout (about $7 million); and the delicate situation athletic director Mark Harlan must navigate.

(That’s the case for all ADs, in all conferences, who are evaluating head coaches.)

But there are other factors to consider, not the least of which is that Utah played hard for Krystkowiak through the very end (e.g., the double-overtime loss to USC).

What’s more, the Utes are seemingly well positioned for next season. The bulk of the core rotation, if not all the key players, is expected to return.

Our philosophy on terminations is fairly straightforward: If an athletic director believes he/she will end up dismissing a coach 12 months hence, there is no reason to wait. Get it done and move on.

But that’s not the situation in Salt Lake City: The Utes are positioned to win next year.

A coach who has made multiple trips to the NCAAs shouldn’t get fired in the middle of a pandemic, based on his team’s mediocre performance during said pandemic, when there is good reason for optimism about the immediate future.