We’ll see threads for every game and for specific topics. This one can be for discussion about the 2019-20 season in general,

Here’s Larry’s pre-season view of his players. I’ll just say I am hopeful but not terribly optimistic.

I haven’t even heard of the lone junior and senior on the team. Amazing. I’m hearing the Finnish kid is legit.

FYI the JR is JUCO guard Alfonso Plummer. He’s a shooter. He might play a lot.

Welcome to the new board!

We donna get spanked this year. But next year…if people stay, that’d be a good year.

“It’s a high-energy group,” Krystkowiak said. “It’s a bunch of guys that are in it for the collective good. We don’t have a whole lot of ego. … It is refreshing.”

Make me worried. As I’ve studied success over my life, I’ve decided that the old school conformist ideology of team first doesn’t really work. I’m not sure if possibly it never worked, because in the days before intensive training and skill development, a team of average players probably could have a lot of success by playing together in harmony. And also, if you go back to Bobby’s Indiana days, there probably was not the intense competition for players that allowed them to eschew coaches with hardline conformist attitudes.

Regardless, I think today you HAVE to accept that great players will have ego, and it’s your job to figure out how to stick the egos together into a team. I think you have to embrace individuality and allow players to express themselves. And most importantly, you have to trust that a team is made up of individuals, and allowing each of those individuals to achieve at their best is what will bring success.

I worry that Larry wastes way too much time and energy in trying to make players conform to his value structure, and it stifles players and causes some to leave and of those that stay, to play uninspired basketball. That said, obviously there are certain standards like academics and punctuality that are for the most part non-negotiable, but my gut says Larry is going beyond that.

All that said, I often reflect on Maj, and wonder what his magic formula was. I tend to think he focused more on execution with detail rather than conformist notions of sacrificing to the team. I think he demanded submission, but it wasn’t of self but rather submission to the fanatical details of execution. For example the legend of the 3", this is a detail that a player was not submitting to. Which is different than submitting to changing an aspect of your personality.

But who knows, mostly I’m just searching for answers because it seems like good players don’t want to stay, and some good players become great players in the NBA, and I just wonder why.

FYI the JR is JUCO guard Alfonso Plummer. He’s a shooter. He might play a lot.

Reininger is in Mechanical Engineering with my son. Very smart kid. They have a class and a lab together this term.

I have always been a huge fan of Utah Basketball. Probably goes back to the fact I attended during the Majerus glory days.
The past few years have been hard to follow for me. The revolving door of players, lackluster performances and being on the East Coast and late night starts have made me less of a fan.
I’m hopeful that this core group of young players can stick around and build a strong unit and help rebuild my (and others) fandom for Utah basketball.
I also want the Utes to win a game I make it to with my boys. We’ve been to Xavier and Kentucky the past few years and they’ve lost both. My boys think Utah only loses basketball games

Watch Larry, Gach, and Allen at 3 p.m. mountain today on the PAC 12 Network. Don’t be late because the segment lasts only 15 minutes. Here is the article from Utah’s site:

Ashley Adamson asked Gach and Both who has stood out them of the new guys, they both said Rylan Jones and Branden Carlson. They said that Rylan makes the right play, is a solid PG, and gets open shots. They said that people are going to enjoy seeing Carlson play and that he is a “high flyer.” Watching Carlson’s senior year highlights from a few years ago, you can see why they would call him a high flyer. One of them also mentioned Jantunen but did not say anything specific that I can recall.

Here are some Branden Carlson Highlights from high school. He does look like he has potential:

Also, here’s a news article about Carlsen’s commitment almost 3 years ago. Somehow I was unaware of him. I guess I tend to think there’s so much road ahead for a mission kid that it doesn’t make sense to pay close attention. Glad this one stuck to his commitment! 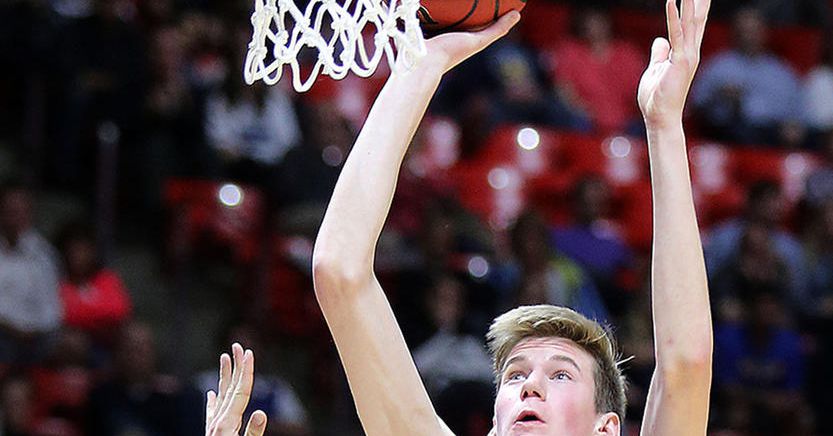 The 6-foot-10 senior chose the Runnin' Utes over BYU, UCLA and Stanford after coming on strong in recent months.

Damn you, why you gotta give me hope?? Jokes aside, I like the look of his highlights. It would seem that he has a broad skill set to work with. Highlight films can be deceiving but I see some power, some finesse, some bball IQ. I hope he grew another inch or two on his mission and didn’t lose too much on the athleticism. I have high hopes for Rylan as well, I really hope he can be that true pure PG like a Andre Miller, Tyron Tate, Jimmy Soto, et al.

Damn you, why you gotta give me hope?? Jokes aside, I like the look of his highlights. It would seem that he has a broad skill set to work with. Highlight films can be deceiving but I see some power, some finesse, some bball IQ. I hope he grew another inch or two on his mission and didn’t lose too much on the athleticism. I have high hopes for Rylan as well, I really hope he can be that true pure PG like a Andre Miller, Tyron Tate, Jimmy Soto, et al.

“Hope” is the thing with feathers -

That perches in the soul -

And sings the tune without the words -

And sore must be the storm -

That could abash the little Bird

That kept so many warm -

I’ve heard it in the chillest land -

And on the strangest Sea -

Yet - never - in Extremity,

There can be no true despair without hope.

Who else is going to Night with the Runnin’ Utes this evening?

Does it serve as a legitimate excuse to going to church meetings?

NWRTU is a legitimate substitution for any/all church meetings.