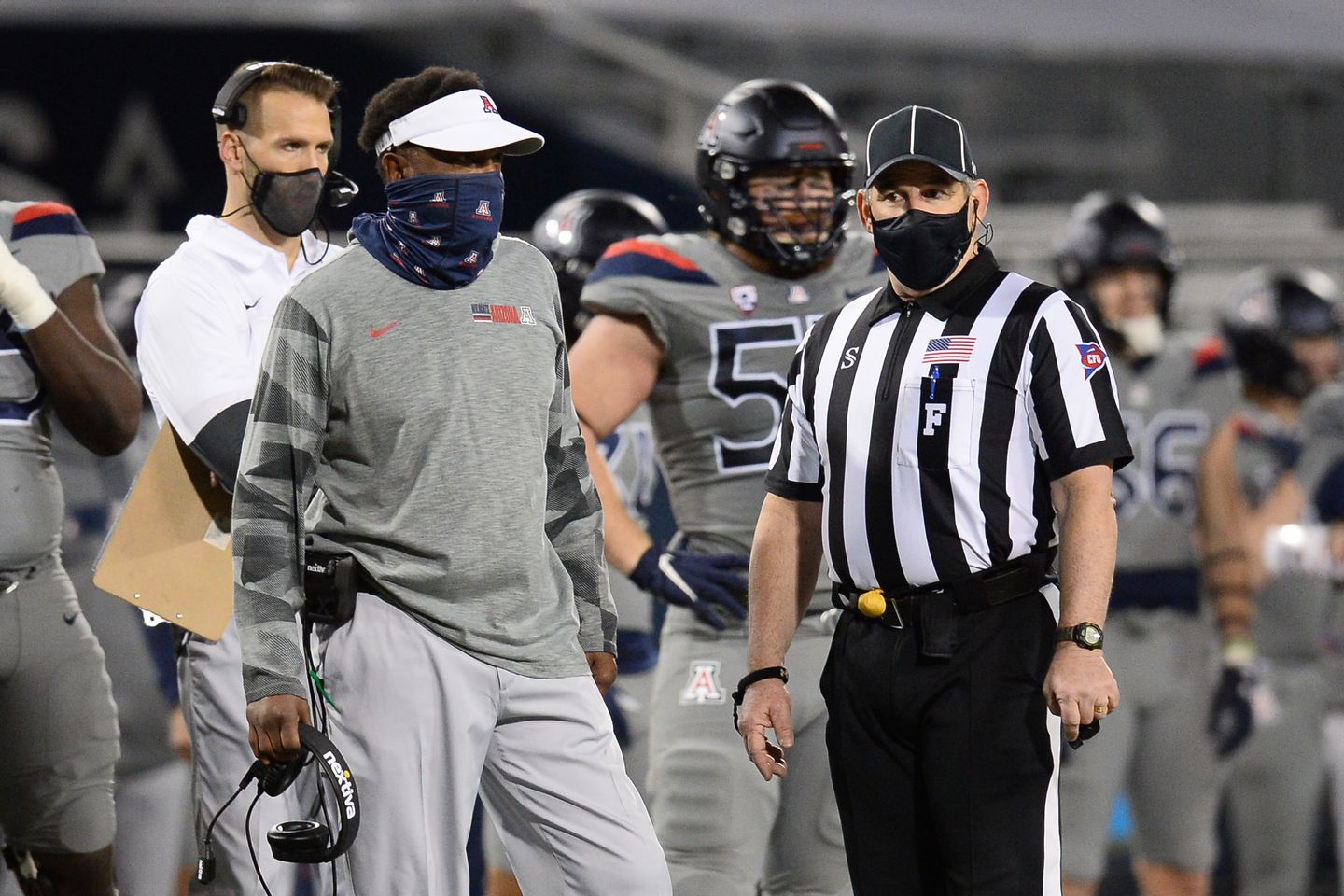 Arizona fell to 0-5 with a 70-7 loss to rival Arizona State on Friday.

A little weird to fire him in a Covid year. Arizona hasn’t even been a mediocre program since the 1980s. Who do they think they can get to turn this around?

They pretty much had coach of Navy prior to Sumlin, except their (stealing this part from LAUte I think) “Heisman” QB didn’t want a run 1st coach. Kid was a decent QB, but too injury prone IIRC.

So in review. Sumlin got paid 10million off A&M and now gets $7 million out of Arizona. I could work with that.

Kid was a decent QB

He was a decent QB, but he was a running QB! That’s the crazy part. He just thought he was more than that. He’d have been great with Coach Ken’s option system.

Was just looking at the article on ESPN about Sumlin, and possible replacement(s).

Jay Hill, and Sitake are mentioned. Coach Niumatalolo was an obvious one that was mentioned also.

I don’t think Hill will get hired there at UofPay, nor do I think Sitake will. Hill for lack of experience at higher than FCS. Sitake just doesn’t strike me as a good fit for Arizona.

Niumatalolo, I think, could do well at Arizona. I can see him modifying the option for an RPO, given that Arizona can get more athletes than Navy. There were other mentioned, like Jim Mora, but other than those I mentioned I’m unfamiliar with the mentions in the article.

Arizona fires Sumlin a day after 70-7 loss to ASU

Arizona has fired football coach Kevin Sumlin after three seasons and on the heels of a 70-7 loss to rival Arizona State on Friday night.

A little weird to fire him in a Covid year. Arizona hasn’t even been a mediocre program since the 1980s. Who do they think they can get to turn this around?

The Arizona basketball program was not even a blip on the radar of college basketball until they hired Lute Olson away from Iowa. All it takes is the right coach. Nebraska was great until Osborne retired, then mediocrity for a long time. It just takes the right coach.

Comparing Football to Basketball is comparing Apples to Oranges. Look at the team diversity in Championships in hoops to football. So many different team s make the final four in hoops where football is of usual suspects

Sumlin has been on the hot seat for a while. Consistently landing on the bottom of the division and conference is bad, but not necessarily problematic. Getting your head kicked in by your bitter rival over and over again is what put the last nail in the coffin.

It will be interesting to see who is on their list of options. If they wanted to stay closer to home, maybe they chase Sitake.

7 coaches in 20 years. The weird thing he was putting together Arizons’s best recruiting class since 2014.

And somewhere Rich Rod, the guy who had winning seasons, a division title, and a NY6 bowl, is laughing.

Rich Rod had .447% winning percentage his last three years. He created the mess and as I said, Kevin was putting together their best Recruiting class since Rich Rod’s best season. They are still suffering from Rich Rod just like Michigan.

Gus just got fired from Auburn. May be an option for Arizona.

He had five winning seasons in six years and had the first division title ever for Arizona football. I think it’s funny they thought sumlin would be an upgrade.

I’m not sure. He was fired from TAMU so that should have been a hint. Sumlin had a couple seasons with Johnny Football and Houston but not much to convince he was “The Guy.”

The Arizona basketball program was not even a blip on the radar of college basketball until they hired Lute Olson away from Iowa. All it takes is the right coach. Nebraska was great until Osborne retired, then mediocrity for a long time. It just takes the right coach

All the more reason to be grateful for Whit.

I read an article that said Rick Neuheisel had expressed interested in the job. He would be a great fit for them. He has been out of coaching for 7 years and is Whitt’s age, but if Herm can do it why not slick Rick.

Rick was .400 at UCLA. Do we think Arizona is on better footing now than when he was at UCLA?

I just don’t see Skippy at UofPay. I still think UofPay would do better with Ken Niumatolo, just my opinion.

This suggestion always looks good to outsiders who understand that a teams’s ceiling is limited, but it looks lousy to fans who want to believe that their team can make the miracle leap to relevance.

Hiring a triple option coach is an admission that you are content to be good and that you believe you will never be great.

I keep hearing some Utah/BYU football fans claim UA is a dead end program for football. I disagree. Its got good facilities, a great location, a solid fan base and the same potential as any other PAC12 program not named USC/Oregon.

The ceiling for UA is not any different than 10 other PAC12 programs.