Going to be a rip roaring crowd tonight. Six minutes to tip. 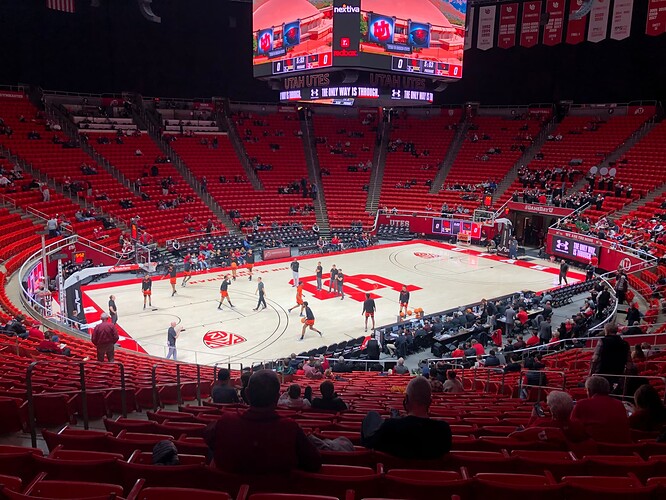 I’m in your photo

Utes shooting it pretty well. Will the Washington General like streak end tonight?

Yeah, still a good % at half even though they missed 5 of their last six. Only 2 TOs and 11 assists. Beavers’ 9 TOs and under 50% shooting are like we are a lot.

Could be the night to break the streak.

I wanted to go tonight but something came up. I’ll be there Saturday.

Going to be a rip roaring crowd tonight. Six minutes to tip.

Looks like the Trump rally in Tulsa 2 years ago

Up 21 with 7:07 left. Where has this team been? Gach really distributing the ball well and team still with only 4 TOs. This is fun.

Now let’s get the win Saturday so we can have two wins in a row.

I liked the hustle last night, much much better shooting, the ball passing was fast and crisp, and very few TOs. The Utes showed that they are not the worst team in the conference.

Curious to know the ins and outs of Mahorcic. I don’t think we’ll see him again to be frank. Reading between the lines, CS’s recent interview led me to think Dusan created some discord on the team. I did see the conflict between him and CS during the recent WSU game. But if true, that is a shame. Apparently, recruiters from other programs thought Dusan might be a risk, but Utah needed a big.

The Utes have been a shot or two away from beating UCLA, ASU and Washington during the loosing streak. In most of those games, the Utes stumbled in the last few minutes.

The Utes showed that they are not the worst team in the conference.

We have a real shot to make some noise THIS YEAR. We are basically tied with Cal and ASU (ASU has missed a bunch of games due to COViD–i.e., forfeits). If we go on a mini two game win streak, we would rocket to 9th in the conference! That’s coach K territory!

Much needed win! One thing that keeps me encouraged about this team. When watching on TV one of announcers always comments on how hard and passionate this team plays. “they don’t look like a team on a losing streak” those kind of comment give me hope for growth. Last night was a glimpse. We don’t have a lot of room for error but we have been in dam near every game this year. Lets keep them coming!

We’re winning the pac12 tourney and going dancing. Book it.