Nurses reluctant to be vaccinated against COVID-19--yet A majority of local healthcare workers have reservations about the COVID-19 vaccine authorized for emergency use, according to a new survey from the UCLA Fielding School of Public Health.

That’s based on a survey taken in September. I would guess the attitude has changed. Remember when President Trump announced a vaccine for right before Election Day? Everyone was skeptical then.

In September the only vaccine out there in “use” was Sputnik.

Even the Russians wouldn’t take it because they thought it came with a side of Novochok. Ok, it probably did.

The comments in the news story from nurses union spokespeople are current. I do wonder why the Fielding School held off so long in releasing the survey’s results.

Anyway, hospitals in CA are going to require frontline workers to be vaccinated. This will probably result in some union-management negotiations, since most of the major hospitals are unionized.

The concern that Operation Warp Speed could have have compromised the rigorous testing of the Pfizer vaccine makes no sense since Pfizer did not participate in OWS. I’d also be willing to guess now that the data are available and have withstood critical review, this survey would produce markedly different results.

The way the Fielding School at UCLA handled the timing of this is puzzling. They are a highly respected organization. Maybe they wanted to hold the results until after the election? Anyway, it occurs to me that union spokespeople have a job to do, and it isn’t always dependent on science. (I’m not union-bashing; all trade associations act this way too.)

I am glad I am riding out the pandemic in Utah.

Officials in L.A. County believe hospitals will be hit by a wave of patients in the coming weeks much larger than previously expected.

I have a lot of nurses say some wacky things about Covid to me in the past few months (and observed a lot of doctors saying similarly weird things). So I’m not awfully surprised by this.

In fact, when I was in the ER from my bike accident one nurse scrubbing my wounds out was telling me Covid was no big deal. The next nurse who helped with the stitches told me it was the worst thing she’d ever seen and it was very scary. The doctor who did my stitches didn’t even wear a mask until he did my stitches. So… a lot of mixed messaging going on there.

I wonder how much of the concern is about the mRNA of the Pfizer and Moderna vaccines. I stumbled across an alleged Pfizer doc to the EU that their mRNA creates a protein that is used by covid, placentas, and sperm cells, possibly resulting in infertility. That said, I’ve come across plenty of documents disputing this.

Or some of this could be Unions trying to strongarm employers into some concession.

I suspect the simpler explanation is probably the more likely scenario.

This will probably result in some union-management negotiations, since most of the major hospitals are unionized.

Back in September as 45 was pressing “they’re just around the corner, folks!” I think a lot of people felt the process might have become corrupted due to presidential campaign politics. (“Russia was first! How did this happen!”)

When the Phase III data came out, those in the clinical world saw that while it’s been accelerated, the process has been followed.

I want to remind everyone of the myths being unscientific and unsupported by scientific evidence about the new vaccines. They are safe. They are effective. And they’re not going to make you grow an arm out of your back.

My favorite myth is that the mRNA vaccines will change our DNA.

What is the effect of mRNA vaccines on DNA? Is it true that it alters DNA?

The mRNA vaccines like those developed by Pfizer-BioNTech and Moderna don’t use DNA.

RNA is like a temporary photocopy of DNA and is used to make proteins. Proteins are the building blocks that cells use to grow and repair themselves. Once the protein is made, the RNA is degraded.

“In humans, the progression is always DNA to RNA to protein,” said Dr. Zain Chagla, an associate professor of medicine at McMaster University and an infectious disease physician in Hamilton, Ont.

“You can’t go from RNA back to DNA in human cells. It’s not possible because we just don’t have the machinery to deal with it. So there should not be concerns about the RNA vaccine somehow getting into the human DNA and transforming it.”

There is one kind of microbe that can produce DNA from RNA — retroviruses such as HIV. And the DNA generated by retroviruses can sometimes integrate into cells, Matthew Miller, an associate professor of infectious diseases and immunology at McMaster University, said in an email.

That has led some researchers to propose that infection with a retrovirus might theoretically provide the proteins necessary for integration of mRNA, although that’s considered “extremely unlikely.”

Miller said that RNA from retroviruses is structurally different from mRNA.

“So even if one was infected with a retrovirus, the mRNA in the vaccine would not alter our DNA.”

Jason Kindrachuk, Canada Research Chair in molecular pathogenesis of emerging and re-emerging viruses at the University of Manitoba, also thinks the risk of integration is tiny. The amount of mRNA in the vaccine is far lower than the amount generated in a natural infection, he noted in an email, and trials of either this type of COVID-19 vaccine or mRNA vaccines under development for other diseases have shown no indications that integration could be a risk. He added there are no noted contraindications for people with HIV on the product monograph, and the only thing it says about immunocompromised patients is that they could have a diminished immune response. 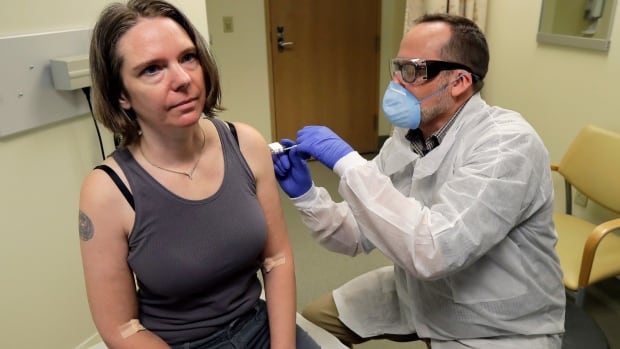 Can mRNA vaccines alter your DNA? More of your COVID-19 vaccine questions...

As the first shots of coronavirus vaccines are delivered in Canada, CBC News talks to the experts to answer your questions about this kind of vaccine and the clinical trials that got them to this point, including: Is the Pfizer-BioNTech vaccine safe...

the mRNA vaccines will change our DNA.

It turned me into a newt. But I got better.

I would think most of the people espousing this particular conspiracy theory should be excited about changing their DNA.