Just saw this (for what it's worth)

Big Ten vs. Pac-12 football matchups could begin as soon as 2023

Pac-12 teams have scheduled 41 games against SEC opponents and only 19 against Big Ten teams between 2023 and 2033. That number against the Big Ten is expected to grow soon because of The Alliance.

I loved this idea, when it was first discussed, codified and publicized some years ago (too tired to do the late night google research to see when).

Why can’t everyone stop talking about it and make it happen!?! I personally think it is a fabulous idea!

Much too late to post now, but I was in attendance at each of the Michigan vs. Utah football series, and have a great story to go with each. I’ll share the Readers Digest version of the 2002 game:

I used to work at home 2-3 days per week in the early 2000-ish time frame. When working at home, I would always go for a workout at the JCC, at lunchtime. I often saw Ron McBride there working out or in the locker room, but never spoke with him, other that to say hello. At some point, after the Utah vs. Michigan game was announced, I saw him in the locker room and mentioned how excited I was for the matchup, and that I and some of the fathers of my son’s second grade class at a parochial school near the U, had decided as a group, to go to the game. He was so excited that there was such a group, that he took my name and number and said, “don’t buy tickets, until you hear from me”.

I had a call sometime later, from someone wanting to know the number of seats we needed, and after responding with the group size, I was told to wait a day or two and we’d have tickets.

Within a short period of time, I had a call asking to arrange payment for x (don’t recall the size of the group) tickets to the game with the total price. I paid, by credit card, and later received the tickets by mail.

To this day I am a hero with that group of men. We sat, literally midfield, on the fifth row, surrounded by people who were apparently used to heckling the visitors in those seats. We had the time of our lives, had a little too much to drink, and except for the final outcome of the actual game, had a perfect experience.

That was the only loss in the series, and looking back, the 2008 win in the big house was easily the best.

Now it’s time for my Utes to start handing out a long string of losses to Michigan’s Rivals. We lost the first game in the series, but I’m betting the losing stops there; at least for the near term. I’ll be at the Rose Bowl watching

Football History vs University of Michigan

There were various outlets covering Commissioner Kliavkoff’s comments on it being ridiculous that college football scheduling was sometimes 10-12 years out (hello LSU on our schedule). I agree. It’s nice to look forward to some of these matchups, but by then, all players, most coaches, and even ADs are different. What looks like a good matchup today could find one or both teams in the dumps by then.

His proposal is to make the schedule a year out (or keep a couple spots open). In this case, for the Alliance.

Makes sense, right? Utah, Pittsburgh, and Michigan are the champions of the three alliance conferences: the Pac-12, ACC, and Big Ten. They would play each other next year

I don’t know how I totally feel about that either as it could cannibalize potential champions, but also produces higher SOS even for the losing team. With an expanded playoff, there would be a little relief for a loss or two, especially to another good team. It would also require a prior-year mid-conference team to win almost all their games and conference to make the playoff, which really is the goal anyway. 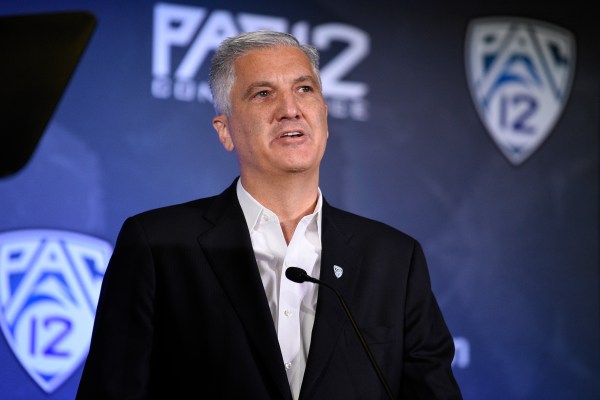 .@Kliavkoff is making lots of new fans not just in the #Pac12, but in the nationwide college football community. You HAVE to read his brilliant scheduling proposal.