Happy Independence Day, and be like Jefferson and Adams

I liked this, from Peggy Noonan:

America is a sharply divided place. The conservative world is divided, marked by the continued estrangement of old friends. There is the divide over Donald Trump, and the connected division between those open to conspiracism and those not. There are divides between those quietly fighting over policies that will determine the Republican Party’s future meaning and purpose, its reason for being, and between those who differ—polite word!—on the right moral attitude, after 1/6, toward the former president.

So let’s take a look at the historian Gordon Wood’s superb “Friends Divided: John Adams and Thomas Jefferson ” (2017), the story of two great men whose deep friendship was sundered over politics and later repaired. 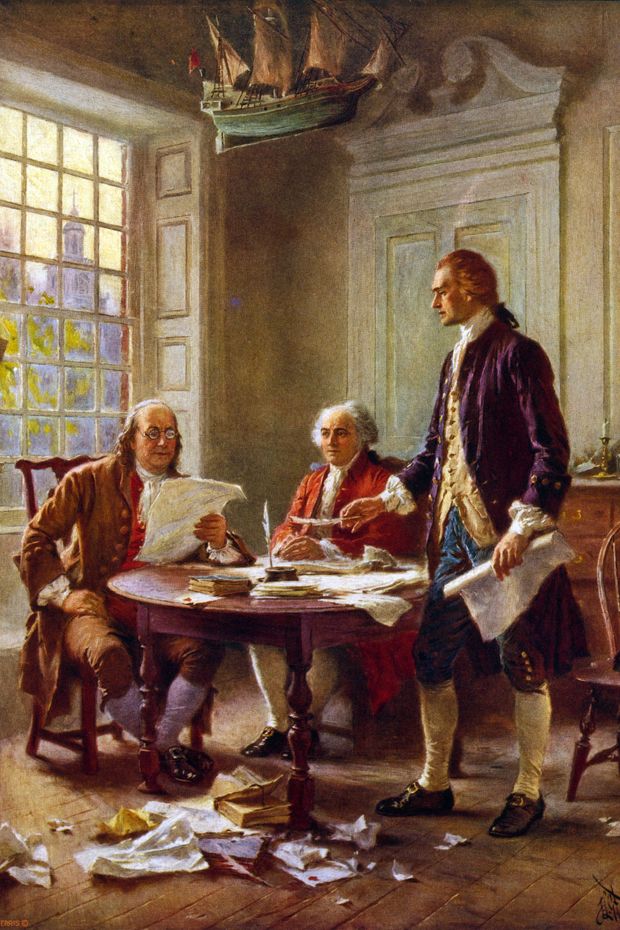 Thomas Jefferson, Benjamin Franklin and John Adams review a draft of the Declaration of Independence, Philadelphia, 1776.

They met in Philadelphia in the Continental Congress in 1775 and invented a nation together in 1776. What allies they were, how brilliantly they worked, in spite of differences in temperament, personality, cast of mind and background. Adams of Massachusetts was hearty, frank, abrupt. He was ardent, a brilliant, highly educated man who found it difficult to conceal his true thoughts. His background was plain New England. He made his own way in the world.

Jefferson of course was an aristocrat, a member of Virginia’s landed gentry. He let the game come to him. Mr. Wood quotes a eulogist, who said Jefferson “kept at all times such a command over his temper that no one could discover the workings of his soul.” He was serene.

Adams tended to erupt. But once past his awkwardness and shyness he was jovial and warm. Jefferson, in Mr. Wood’s words, “used his affability to keep people at a distance.” Their mutual friend Dr. Benjamin Rush said Adams was “a stranger to dissimulation.” No one ever said that of Jefferson.

In the Continental Congress Adams found Jefferson so frank and decisive on the issue of independence “that he soon seized upon my heart.” Jefferson would tell Daniel Webster that Adams in those days was a “Colossus.” He was “not graceful, not elegant, not always fluent.” But in debate he’d come out “with a power, both of thought and of expression which moved us from our seats.”

Their friendship deepened in the late 1770s and ’80s, when both were diplomats representing the new nation in Europe. Abigail Adams captivated Jefferson; she was so intelligent, well-read and politically astute he called her “one of the most estimable characters on earth.” Abigail told Jefferson her husband had no closer friend. Jefferson was “the only person with whom my companion could associate with perfect freedom, and unreserve.” When Jefferson was made minister to France and Adams to Britain, their families parted. Jefferson wrote to say it left him “in the dumps.”

Jefferson later told James Madison that while Adams was vain, that was “all the ill” that could be said of him. He was a man of “rigorous honesty,” “profound in his views,” and “he is so amiable, that I pronounce you will love him if ever you become acquainted with him.”

What blew them apart? The French Revolution. Other things too but 1789 was at the heart of it. They disagreed on what it was (a continuation of 1776, said Jefferson; a perversion of 1776, said Adams) and what it would produce (a Continent drowning in blood, said Adams, who could see a Napoleon coming; a global flowering of the spirit of liberty, thought Jefferson, who seems to have mistaken Robespierre for Paul Revere ). When the revolution’s ferocity was revealed in the Terror, Adams threw it in Jefferson’s face: “In France anarchy had done more mischief in one night than all the despotism of their kings had ever done in 20 or 30 years.”

If it hadn’t been for the revolution, they might have gotten through the other strains in store. There were many. Adams became the second president, served one term, ran for re-election and was defeated by Vice President Jefferson in the brutal, rancorous 1800 election.

They disengaged, brooded (mostly Adams) and said bitter things in letters to others (mostly Jefferson).

What saved their friendship? Their friend Benjamin Rush, another great though insufficiently remembered founder. He and Adams had a long correspondence. In 1809, as Jefferson’s second presidential term ended, Adams teasingly asked Rush if he’d had any dreams about Jefferson. Rush had a lot of dreams and often shared them. Months later he reported he did have a dream, about “one of the most extraordinary events” of 1809, “the renewal of the friendship” of Adams and Jefferson. In the dream Adams wrote a short note congratulating Jefferson on his retirement.

“A Dream again!” Adams responded. “It may be Prophecy.”

Rush wrote to Jefferson to soften him up. You loved Adams, he said. Of all the evils of politics, none were so great “as the dissolution of friendships.”

Rush then told Adams to forget what had separated them—explanations are required of lovers, he said, “but are never so between divided friends.”

On New Year’s Day 1812, Adams sent Jefferson a friendly letter. Jefferson wrote back right away, what he later called a “rambling gossiping epistle.” And so their great dialogue recommenced.

They wrote faithfully for 14 years, 158 letters, on everything—what they were reading, who they saw, political philosophy, a thought they’d just had. At one point Adams said: “You and I ought not to die, before We have explained ourselves to each other.” They did their best. Adams would bring up the French Revolution. Jefferson would dodge and share his thoughts on the religious beliefs of the Shawnee Tribe. Adams remembered their history. “I look back with rapture to those golden days” when Virginia and Massachusetts “acted together like a band of brothers.”

They were writing for themselves but also, they knew, for history. They knew who they were.

And so it continued, a great pouring out, until the summer of 1826, the Jubilee summer when the entire country would celebrate the 50th anniversary of what had happened in Philadelphia on July 4.

Both men were near the end of their lives. Both held on for the great day. Wood reports Jefferson woke the night of the 3rd and asked if it was the 4th yet. His doctor said it soon would be. Early the next morning he woke again and called for his servants. Just after noon he died.

At the same time Adams, 500 miles to the north, lay dying. A memoir by Abigail’s nephew William Cranch, chief judge of the U.S. Circuit Court of Appeals for the District of Columbia, reports that Adams awoke on the Fourth to bells ringing and cannon booming. The celebrations had begun. Asked if he knew what day it was he said yes, “It is the glorious 4th of July—God bless it—God bless you all.” According to legend, just before he died at 6 p.m., he awoke and said, “Thomas Jefferson survives.”

What drove their reconciliation? A tenderness, toward history and toward themselves. They knew what their friendship had been. They had lived through and to a significant degree driven a world-historical event, the invention of America. They had shared that moment and it had been the great moment of their lives, greater than their presidencies, greater than what followed. They had been geniuses together.

As the Fourth explodes around us we should take some inspiration from the story of an old estrangement healed. We’re all trying to repair something. May you have a Benjamin Rush. 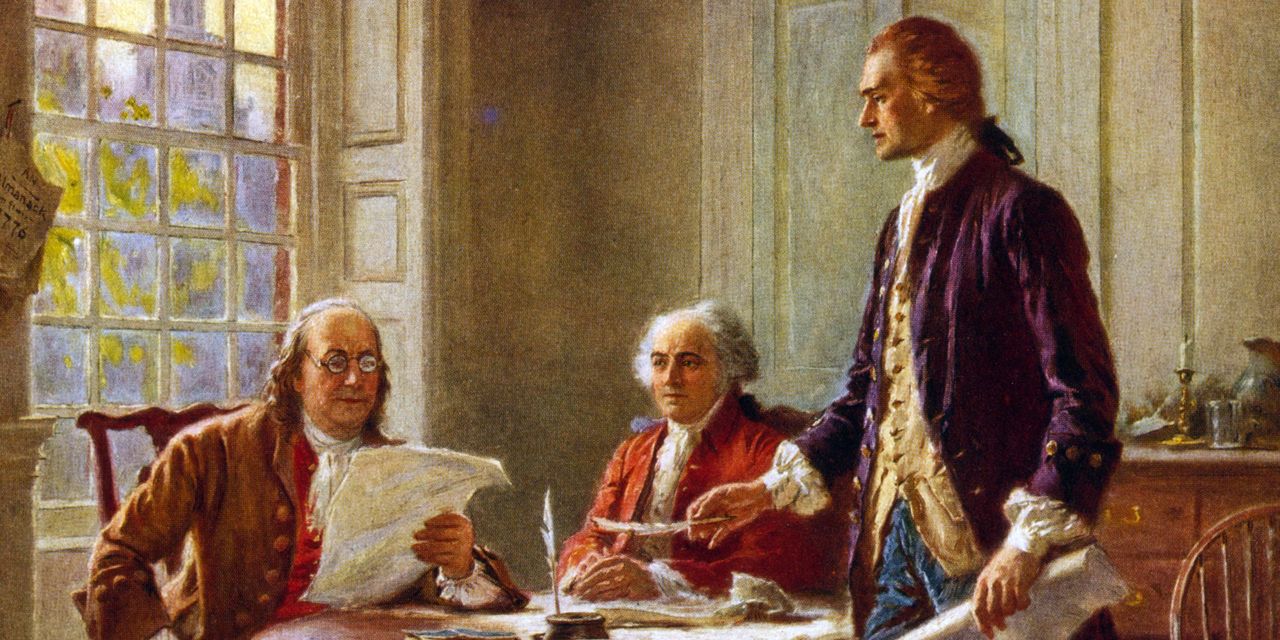 Adams and Jefferson met in 1775 and came apart in 1789. A forgotten man brought them together.

I try to be like them. Have extremely different views, but respect and like each other enough to still call the other a friend.

I tried that with someone last year, lost a friend and called called a racist, bigot, hateful, etc for my troubles. I thought dude was a friend, I was wrong. He decided to cut things off because I didn’t support his views/ideas blindly. Oh well. I guess that I have regret over something or someone who never really was a friend. Glad we still have Adams and Jefferson as examples to follow.

We can disagree and still love each other, unless your disagreement is rooted in my oppression and denial of my humanity and right to exist.

These days, I would probably expand it to say “mine and others” instead of just “my”.

All that’s missing is a story of about how Baldwin and a close friend had a major falling out, and then they made up and were able to see past their prior differences, leaving a great inspirational example for us all to follow.