Good Luck to Anyone in the Summit Park Area 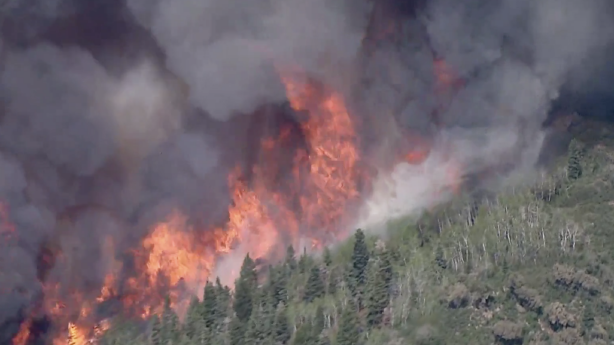 Fast-moving fire in Parleys Canyon up to 2,500 acres; mandatory evacuations...

A quick-moving human-caused fire in Parleys Canyon is reportedly threatening neighborhoods and canyons are being evacuated.

In all, Utah Fire Info estimated that 6,000 to 8,000 homes are under evacuation. Those being evacuated are being told to go to an emergency shelter at Park City High School, located at 1750 Kearns Blvd. Park City. Park City Fire District officials said dispatchers were planning on sending a reverse 911 call to residents in the area. Their firefighters had been reassigned from the fire to “structure protection” in the Summit Park area.

Terrible for those involved!
Swift moving with complicated terrain. This thing has legs…
Hoping evening conditions are condusive

Drove through it today before Parleys was closed. Fast moving indeed.

I have friends living up there. I hope they are OK.

Time to make some calls.

All caused by a malfunctioning catalytic converter. Wow! The air support is fortunate that Little Dell and Mt. Dell reservoirs are only 2 miles away. Special praise for the ultimate badass jet pilots flying a few hundred feet over the treetops to drop retardant. God bless them!

Pretty astounding how many planes they had on this so quickly. The Incident Comanders must have been very concerned for potential devastationof the communities.
They’re saying it’s 0% contained, but driving up to Park City this morning sure looks like some of the initial fire scar isn’t even smoldering. That’s great, however I don’t know how far into the interior this thing’s gone and what it looks like later if the wind picks up today. Also air quality and poor visibility aren’t conducive to getting multiple aircraft through tight flight corridors.
Hoping the best for all involved