6:30 PM MT time on FS1. Tom Chambers will be honored at halftime so everyone get out and join the fun.

Ducks are 14-7. After a slow start, they have gone 8-1 and worked their way on to the bubble. Big game for them.

Change in TV coverage. Game will start on Fox Business, then move to FS1 once the NASCAR fans are done drinking and waving Confederate Flags.

@UtahMBB
Due to a scheduling conflict with FOX, our game Saturday vs. Oregon will start on @FoxBusiness and then move to @FS1 at the conclusion of NASCAR’s Clash at the Coliseum. CHANNEL FINDER ⤵️⤵️ foxbusiness.com/channel-finder https://t.co/dHCGWDWhCF 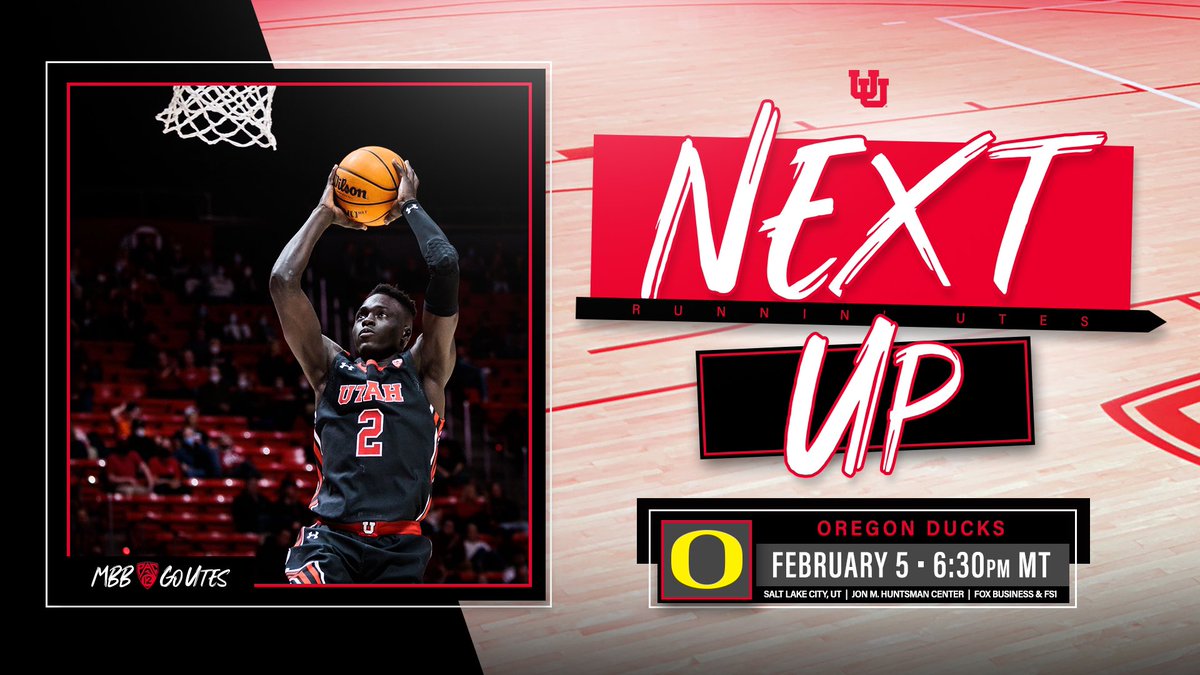 I guess anything can happen, but Altman is like 4,000-2 against Utah, so I am not getting my hopes up.

Horrible offensive foul call on Lahat. The defender was in the air.

Tough to defend a hot three-point shooting opponent (who also gets plenty of points in the paint).

Crucial call on that Gabe Madsen foul. I couldn’t tell what actually happened.

The Tom Chamber tribute was fun too. Tom had some great comments. Who was Goose that he referred to?

It’s my son’s birthday so when it seemed all was lost (down by 14) we considered breaking tradition and leaving early—something I try never to do. But we decided that since there’s no quit in this team we owed it to them to stick it out. I’m glad we did. I’m impressed that Smith can get his players to play with such heart and intensity. With a little time and improved talent in a few spots we all might be very happy with what we see out of his teams.

The Tom Chamber tribute was fun too. Tom had some great comments. Who was Goose that he referred to?

You remember Goose, don’t you? Short, white guy. Waddled around a lot. He had a beak on him! The opposing team couldn’t ruffle his feathers. Good ole’ Goose!

On the last timeout they briefly showed Smith talking to the team in the huddle. Every eye was on him, everyone focused.

In a grueling season in a sport where everyone wants to win, Smith is performing a bit of magic to have these guys dialed in like this.

Great observation @Ma-ake. Terrific game and comeback by the Utes. Tough breaks near the end, and poor Eli Ballstaedt could not pull off the PVD 3 point play.

Listened to ESPN700 post game broadcast, mostly fascinated to hear Craig Smith. I really like that coach’s tone and demeanor. His knowledge of the nuances of the game and player capabilities is to me inspiring. He helped make that loss feel like a victory of sorts. He was entirely complimentary, not only of his players, but of the Oregon players. Texting during the game last night with a buddy, I noted that Oregon’s talent is mind blowing good, and he noted back especially at the guard line. Still, somehow the Utes found a way to claw back in and make an exciting game of it.

I keep thinking that no matter where he has coached up the ranks of divisions in college sports, Coach Smith has produced a winner. I believe if we are patient, he will do the same at Utah. He has a massive handicap. Good players want to play on better than good teams, play in tournaments, win championships. So Smith has an uphill battle convincing better players to become Runnin’ Utes during this transition. But I actually believe he will pull that off and sooner than most of us think possible.

You remember Goose, don’t you? Short, white guy. Waddled around a lot. He had a beak on him! The opposing team couldn’t ruffle his feathers. Good ole’ Goose!

I don’t know. There is a gaggle of players that could describe.

They didn’t quit after the first half. They played their way back into the game, and gave themselves a chance to win.

Yes we lost, but we are showing signs of life. Maybe the Conference Tourney will get interesting with a spoiler.

They had to play their way back into the game twice. They were within 4 then stumbled, the T on Coach Smith didn’t help, and quickly they were down double digits again. And it didn’t stop them! All I can ask at this point is to visibly see improvement, and I think we do. We gave UCLA, Washington, and Oregon all they could handle over the past two weeks. One could easily picture a lesser group just folding the tent, and they don’t. That’s culture, and over the long haul will lead to good things.

Look at how far away from the basket the ball was when Marco caught it on the alley oop. Gracious!

We were sitting 20 rows up behind and to the right of the basket, so we had a great angle to see it. When he went up for it I thought there was no way he could dunk it. 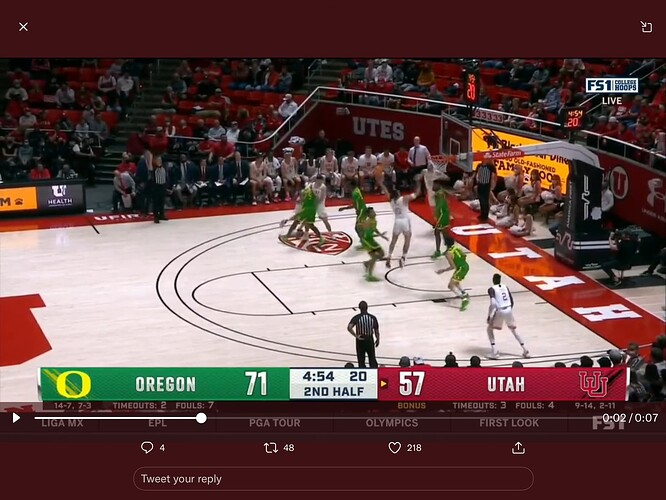 Why no Jenkins in the last minute? Have Gach use his length to guard the inbounds pass, and play Jenkins over Ballstaedt in case you need a 3pt shot.

Madsen shot OU out of their zone in the first few minutes. When they switched to M2M the Utes promptly turned the ball over twice until they figured it out a bit. The M2M neutralizes Madsen.

The OU guards really hurt the Utes with dribble penetration. The Utah guards struggled to stay in front of them.

The Utes gave themselves a chance by keeping the turnovers down. That’s surprising considering OU’s guards are darn good. If this keeps up, the Utes will win a few more games than the current record suggests.

Let give the team some credit for the battle they put up on the boards. The Utes were -11 on the boards about 10 minutes in, and finished -3. They actually won the boards the last 30 minutes!

The overall stats were relatively even. The difference in the game:

Isaac Johnson remains firmly anchored to the bench. If he’s portal bound, I imagine it will be Utes vs TDS for his services.

Next up, Saturday evening at Colorado. The Buffs are struggling, going 3-5 lately. They have recently lost a couple of key guys to injuries so the rest of the season will be a challenge for them.