Playing at Maryland or Michigan at 10:30 a.m. Pacific Time should be fun.

In 2018, Larry Scott had the opportunity to lock us all into a deal with ESPN until 2030. But no, he didn’t want to. Those PAC12 ratings from China hadn’t kicked in yet.

I think we’re all of the same mind: good riddance to Larry Scott.

I also seems we’re living the Chinese curse of: “may you live in interesting times.”

After having to play Ohio State, Michigan, Penn State, and Norte Dame every year it’s all relative.

And Waco is an underrated charming community.

lol - we have a young guy on our team who just graduated from Wisky in '21.

I asked him how the winter was here. “What winter? It was pretty nice, actually”

Those PAC12 ratings from China hadn’t kicked in yet.

I believe it’s the solemn duty of every fan of the former PAC12 teams to kick Larry Scott squarely in the nuts upon encountering him in the wild. The gofundme for legal assistance will easily top $100k

I don’t think I own a winter jacket. Those places will be cold, but not cold enough to make me miss the feces and needle laden streets of Berkeley & San Francisco.

but not cold enough to make me miss the feces and needle laden streets of Berkeley & San Francisco.

You must hang out in weird parts of town…

Perversely drawn to them?

I don’t think I own a winter jacket. Those places will be cold, but not cold enough to make me miss the feces and needle laden streets of Berkeley & San Francisco.

You’ll give up the needles of Berkeley & San Fran for the meth of the midwest. It’s a toss-up really.

If the best two scenarios don’t work out, this would be acceptable: 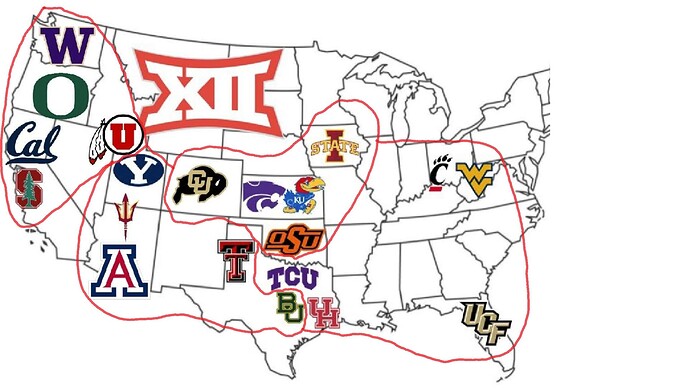 I can see one or two other workable options, as long as we all agree not to move the red line at the point of the mountain

If the best two scenarios don’t work out, this would be acceptable:

Acceptable only if we don’t have to be stuck playing byu every year. Mix it up a little.

So, BIG12 fans (getting Grima Wormtongued by our BYU friends) are gettin’ mighty upset that Utah is less than thrilled at the prospect of joining their truckstop conference.

Now, to be clear, I don’t actually believe this. I just think these fans are being lame and dumb for Utah being more upset that their conference is crumbling around them and being less than thrilled at the possibility of joining the BIG12.

Basically, nobody is excited to play BYU.

Basically, nobody is excited to play BYU.

If they’ve done their homework, looked at the long & wide trail of angry conference mates in BYU’s wake from the WCC, to the MWC, to the WAC, going all the way back to the Sports Illustrated article about The Most Hated Team in America, they’ll have some understanding of what they have coming.

I knew they’d piss everyone off in the WCC, but it was sadly amusing to see fan reactions last year. “Thank GOD almighty they’re leaving!” The WCC fans get it.

It’s hard for somebody to change their personality, and it’s extraordinarily difficult to change culture. Any 3rd grader would know that we’ve had a front row seat for so long, so we have an intensity in insight on this issue few other programs have.

I had to laugh looking at CB yesterday - somebody mentioned Wyoming would be a good school to invite, and there were a few who chirped along in agreement. They would have no idea what hit them if they drove to Laramie to pitch this idea.

“That was weird. I don’t understand the anger. Where did that come from?”

In fairness, I think the Cougs have been chastened a bit by being in the wilderness all those years, but they haven’t really changed, because it’s in their DNA, it’s in their belief system about BYU.

They’ll offend everyone in the B12, it’s inevitable. It’s like a law of physics.

Right now they’re projecting their own offensiveness onto Utah, but all the MWC fans I’ve talked to after we left said they understood why we went to the PAC, and we then shared stories about how fundamentally detestable BYU was, kind of a bonding in departing.

Sorry for this analogy. But for anyone who wants to know what dealing with byu is like. It is like kissong your cousin. No one likes it, it is awkward, and you feel worse off than when you started. (For the record i have no personal experience in this) (Also those in the sec and big12 might argue this especially byu)

The PAC and the schools have a couple of years to figure this out. If the PAC decides to stay in operation, I hope they use a template of the contract the ACC used to get everyone locked in. You can’t sell a shifting sand dune to the TV guys and hope to get the money.

If we’re headed for super conferences, does Arizona State or Arizona make the cut? If they don’t believe they will, the Big 12 appears more stable by virtue of having no teams that would get poached in the first two or three round of consolidation (if any, ever)

The Arizonas could actually control their own destiny rather than have it dictated to the by notre dame and Stanford. They kill the pac to increase their bargaining power in the big 12 (just based on inventory) and take care of themselves with more steady cash flow.