FYI, I plan on putting my 2020 Efficiency stats over here this year, as well as UB5.

Anything you’d like to see this year please let me know and I’ll try to work it into my reports.

For those unfamiliar, efficiency is (PTS+REB+AST+STL+BLK) minus (MISSED SHOTS + TURNOVERS)

Not a lot to compare to yet but Utah had season highs and season lows in everything.

If Utah cleans up the turnovers 1/6 possessions was a turnover
Lucky for them, Nevada only shot 41% from the field.

Next up Mississippi Valley State. I predict a 40+ blowout

Nobody played over 25 minutes, the two guys who played 23+ minutes got triple doubles.

There were some negatives in this game. Mississippi Valley State had 8 offensive rebounds, 9 steals, 6 blocks and only 16 fouls. They also had 93 possessions.

170 combined shots and 238 combined efficiency might blow the doors off the record books.

Not much else to say except Utah covered.

Minnesota next Friday. Current numbers say Utah +8 in that game, maybe that win over Nevada will help. Minnesota plays Oklahoma today and at Butler on Tuesday. They might be tired going into JHMC.

When the opposition rolls over and quits at the tip-off, the stats mean nothing. Those ware nothing but an outlier for the history books. The next game will be the tell.

FYI, the far left column is the season ranking

Oturo had a great game and really did everything he could to help Minnesota get back in the game.

Honestly, every stat said Minnesota was poised to win this game except two categories, points and shooting %

Utah was +11 FTM / +12 FTA and one stat to note early in the season. Utah doesn’t foul.
Utah has committed less fouls in every game
Nevada +13
MSVST +2
Minnesota +5
This translates to more free throws and Utah.
Utah opponents average 5 FTM and 9 FTA per game
Utah free throw average 16.7 FTM and 24.0 FTA (Nevada was a huge discrepancy)

Minnesota shot and kept shooting, they were +12 on the offensive boards which is the one reason they kept this close. Minnesota collected 35.4% of all offensive rebound opportunities. That’s way too high.
Minnesota was -11 on turnovers, which was due to being +9 on steals. Offensive boards, and steals kept Minnesota in the game. After the 16-0 start we all thought it was over, but not Minnesota.

This was the slowest game of the season, only 136 possessions (185 in the MSVST game). 142 combined points was a season low, ahem Utah scored more 143 in their previous game.

The only season high Utah garnered was 6 block shots. 3 by Carlson, 2 by Allen and 1 Gach.
Utah was a bit lucky to pull this game out but the huge positive is this young team found a way to dig deep and fight out a win. That experience goes a long ways.

Next up… the Myrtle Beach Invitational

Gach did not have a good game. 2/11 and 0/5 from three puts him at a -3 efficiency
Nobody really had a good game…unless you’re a Chanticleer fan.

#3, #4 and #5 performances against Utah all came in tonight’s game. Those 3 players Dibba, Jones and Brewton beat the entire Utah team. Brewton went 6/9 from deep.

Utah allowed 29 made shots (avg 26.0 allowed). 10/16 from the free throw line were both season highs for Utah opponent. 29 defensive boards and 41 total rebounds, also season highs. Utah gave up 6 blocks, 45.3% from the field and 45.8% from deep. All season highs. One good thing is Coastal Carolina had a season low 41.4% assists per shot, that just means guys were creating and scoring, winning one on ones.

Utah was +4 on offensive boards and +3 total rebounds but that’s mostly because they were -12% shooting (season low). CCU was +28% better from deep. That’s huge. +6 from three pointers made is 18 points. Couple that with -3 possessions and +4 turnovers and Utah just lost this game all over the place. I blame this on a long road trip and a very young team.

The teams did combine for a season high 28 offensive rebounds (season high). Everything else was pretty slow. 136 points, 121 shots, 21 assists, and 39.7% combined shooting were all season lows.

Not much else to say other than Utah showed their inexperience. Hopefully this game sticks in their memory of how not to play going ahead.

Next up…Ohio. The Bobcats have lost 2 in a row vs ranked teams and they weren’t even close. They are 3-2 overall with 3 snooze games to open the season. Utah should be favored in the -10 to -14 range.

Utah was back to form vs Ohio

As for Utah, 96.4% from the line 27/28. Makes and % both season highs. This was a slow game so Utah’s attempts and rebounds were low but the big difference was rebounding. Utah was -8 on fouls and +15/+13 from the stripe. Difference of the game.

The teams combined for 39 made free throws (season high) and 90.7% from the line. Other than that everything else was season lows due to the slow pace of play.

Utah will face Tulane tomorrow morning. Early 8:30 am tipoff in Utah. I have Utah by 21 in that game for the 5th place game. Utah should go 2-1 in the tournament, not the 2-1 everybody expected but 2-1 nonetheless.

Utah held Tulane to only 21 three point attempts (season low), they only picked up 17 defensive boards and 25 total rebounds (both season lows) and only 1 block (another season low) but Utah allowed 45.6% from the field (season high) and 85.7% from the line (also a season high)

Utah on the other hand had season lows in free throws 8/11, defensive boards 23 and a season high in turnovers (20). 13 fouls was a season low and ended up costing them at the end of the game when they had to foul 4 times just to stop the clock.

Timmy and Both can not combine for 12 turnovers… ever.

Toolson and Childs played an awesome game. The reason Utah won this game wasn’t because of the refs (sorry Zoobs) it wasn’t because of Childs’ conditioning…it was because of Utah’s depth. BYU came out blazing with Childs dropping threes and being the aggressor. Eventually, that wore off. Between Toolson and Childs they had 30% of the minutes and 67% of their efficiency. Haws was miserable. 2/7 shooting and 5 turnovers plus he fouled out.

Utah on the other hand only shot 24/31 from the line, not even close to their season high but above their average (17.3/23.3 avg). Utah had a season low 11 turnovers and high 10 steals (again…not the refs fault). Utah failed miserably on the offensive rebounding opportunities. Only 14.8% were obtained 4 offensive boards out of 27 opportunities (season low). Utah also had a season low of assist per shot at 40.5%. BYU did a good job of being the aggressor on defense, the downside to that is they were penalized with fouls. Utah became the aggressor on offense late in the second half about the same time as BYU’s lack of depth began to show. Utah was -9 on turnovers (season high) and +6 for steals (season high).

Changing point in the game was at the 0:31 mark…the missed lay-up from Jones. Utah was ready to go up 85-84 and had all the momentum. Jones fell to the ground in a move that I can only assume was to summon all the strength of Majerus and Misaka to finish the game in Utah folklore forever.

I hope the missed lay-up from 1’ will live in Jones subconscious for at least the next 4 years and he burns with the fire of Utes in the past for Ute greatness. Time will tell.

Next up…Central Arkansas. Utah is a 92% favorite to win.

I was excited for Rylan because I am one that believes that you need a great point guard more than any other position. I’ve been a fan long enough to have seen some greats as well as a number of really really good ones. One thing I was hoping to see from Rylan was that special something that some kids just have that makes them able to come up big in big moments, the ‘Gamer Gene’. His high school career and things people said about him made me hopeful, but you never know until you see it. He had a couple flashes already this year, some crazy 50:50 balls and some clutch plays, that made me think WOW, this kid could really be good. But I never dreamed to see it on full display so early in his career. It’s obvious this kid has some special grit, and also seems like a good kid, very proud to have him representing the U.

All you had to say was Olympus high grad.

I’ve always heard the term “Coaches son“ and always knew it brought a bit of depth to that player but you can see it in Rylan. Bobby Hurley was the coach his son, same goes for Austin Rivers.

I know Chris Jones played for Utah back in the 90s and became an asst coach at Utah State and bounced around a few places in, including under Majerus for a couple years. All that wealth of information is somewhere inside of Rylan.

Agreed, not always but quite often. My middle son’s best friend growing up was the HS coach’s son. He was a really good coach that probably should have went on to coach college because he was perhaps a bit prickly to coach HS. Imagine Majerus coaching HS but without the R-rated stuff. Anyway, Braxton was a special player too, super clutch, never got sped up, pure shot, score from anywhere on almost anyone. Was really excited to see him play college ball. Unfortunately he died in October of a brain tumor at age of 22 after a year and half battle. He was such a great kid. I miss him everyday. I’m gonna tell myself that maybe Braxton is helping my team since he has some time on his hands now.

Timmy Allen is a stud.
7 of Allen’s 9 games rank in the top 11 games for Utah
Tied the season high 29 PER yesterday.

Jantunen averaging the least of minutes of the 4 at 20.9 minutes per game.
Below are my player rankings and where they were last week

Side note, here’s the story on Sikiru “SK” ■■■■■■■ that’s his name…pretty cold to block it out, a really cool story out of Central Arkansas. 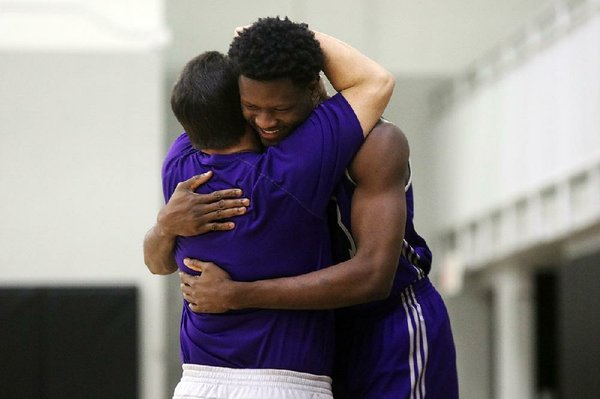 Sikiru Shittu remembers when he died.

Hopefully Rylan Jones will be ok, took a big shot to the ribs. Diagnosis was a rib contusion, 3-7 days recovery but easily reaggravated.

Top performances versus Utah this season

Kentucky is a solid team with 6 freshmen on the team, imagine having to play with 6 freshmen!! Tough
They’re a good team, just sloppy and can’t shoot the 3 very well.
2/17 was 11.8% Makes and percentage both season lows for a Utah opponent
Utah has been guarding the 3 well lately. 9/50 allowed the last 3 games 18%
Kentucky only got 17 defensive boards, 73.9% of opportunities, which is actually really high.
The problem was Utah shot 54.8%…there just weren’t a lot of opportunities.
53.3% from three 8/15 was a season high, although 15 attempts was a season low (Ohio 15)
Utah had a season high 19 fouls and lows in offensive boards 4. Only 21.1% of all offensive rebounds were had…but again…Utah shot well.

Utah was +41.6% from 3. +6 on shots made from deep. When you win by three, that’s the game. Walton kept alluding to Evansville and the drive and kick for three. Worked like a charm, thanks for the tip Bill.

That’s about it. Utah got hot and caught UK napping at the first. Weathered the storm and got them into foul trouble. The overturned block call at the end was huge.

Can we say enough about Jones? If Covey and Jones got in a fist fight, neither one of them would ever stay down for the count. In the nicest but toughest fight you’d ever see.

Next up…Aztecs. The battle for Native American superiority. I think San Diego State is the better team. About as equally as talented as Kentucky but better shooters.

FYI, Utah is now 3-0 as underdogs this season.