What's the most wholesome experience you had with a stranger?

I think this video is a good fit for this post. Guy rides a Honda C90 through Iran and has nothing but positive experiences.

His youtube channel is really good. He’s riding the same C90 from Alaska to Argentina. 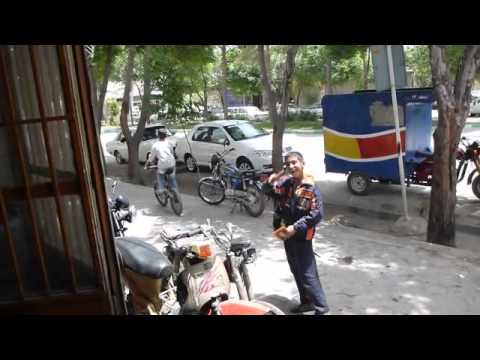 I once had the opportunity to sit with Don Rickles at a Black Jack table in Vegas while he insulted me. I am not sure anything Vegas can offer now would top that.

I think this video is a good fit for this post. Guy rides a Honda C90 through Iran and has nothing but positive experiences.

His youtube channel is really good. He’s riding the same C90 from Alaska to Argentina.

This is fantastic. People who have a parochial mind-set and haven’t traveled just can’t seem to grasp the goodness around the globe, irrespective of creed/religion/customs/ethnicity/etc.

Learning that I have things in common with people throughout the world is one of the greatest lessons I have learned. Traveling and mingling with locals is a beautiful experience.

Last year, for a big wedding anniversary, we took a trip to Istanbul and Italy. Our last day in Istanbul coincided with the 1st day of Ramadan. People told us that the place to be was the plaza between Hagia Sophia and the Blue Mosque so we went not knowing what to expect.

When we arrived, the plaza was filled with thousands of tables, chairs, and a stage. There was various entertainment, soft music, scripture reading, and history telling. Characters from children’s shows wandered about entertaining and taking pictures with kids (and adults). We found out that everyone was invited and the municipality was providing a dinner to anyone there. We sat at a table off to a side to just observe and enjoy.

A few college-aged kids asked if the seats near us were occupied and since they weren’t, the sat down. We started talking - one of them was better at English as his college business program was taught in English. We talked about their education, their hopes, their dreams, a little politics (not too much, but they had just had a mayoral election where a more liberal candidate beat the conservative for the first time in decades which they were excited about but cautious to say much about). We discussed religion and asked about Ramadan and their experiences and their families.

As the sun descended, volunteers passed out a box with food and then a warmed sealed tray with hot food. The students walked us through what was being served, that we should eat the date first (helps with digestion after fasting I guess). The sun set, the mood calmed, then the call to prayer started echoing across the city from the minarets (we were seated near the blue mosque with the sun setting behind it). The crowd of thousands, probably tens of thousands became absolutely quiet. They started eating, then all paused, a prayer was said (the students let us know what was going on), then every ate their meals while soft music was played. An old man near us downed his whole meal and was gone in minutes, trying to beat the crowds. The students finished, bid their farewells and we just soaked it all in, heading back to our hotel with the masses.

When I was eight years old in 1979, I was visiting my aunt in New York City for the summer. Back then, I was a big fan of Mad Magazine, so big of a fan that I insisted to auntie that we go see the building that housed Mad headquarters on Madison Avenue. She agreed that we would go see the place one day while shopping in midtown.

After shopping for a few hours, we headed over to 485 MADison Avenue. I could see a little sign that showed that, indeed, this was their humble headquarters. My auntie suggested I not get too excited, as they likely didn’t offer tours. Undaunted, I led the walk up to the front door of the offices. At first, there was some ambivalence about having an unannounced visitor, but one gentleman (I wish I could remember his name!) saw the youthful eagerness and excitement on my face, and offered us a walk around (I think he had to go get permission).

On the “tour”, I got to see a lot of original art, etc. up on the walls of the offices. There was a bunch of other memorabilia as well, and most prominently, stacks and stacks of the magazines and little paperbacks they used to sell. This guy seemed to really be amused by my enthusiasm for Mad Magazine, and he started piling up a bunch of the paperbacks to give to me. He also gave me some of the magazines as well. He didn’t stop there, however. Next he grabbed a poster that had the hand-drawn faces (it was a print) of the various artists and writers of the magazine. He went around and had some of the folks who were in the office sign the poster. This included Bill Gaines and Al Feldstein, who happened to be in the office that day. Unfortunately, but not surprisingly, artists like Don Martin, Sergio Aragones and Antonio Prohias weren’t there, they probably mostly worked at home, so no autographs from them. However, this gentleman made up for that. He asked me who my favorite Mad artists were, and I said Don Martin and Antonio Prohias. He went into a room, and came out with an original Spy vs Spy pencil drawing from Antonio Prohias. I was exploding with excitement at this point.

That has to have been one of the best days of my youth. I’ll never forget the kindness of that man. Sad prologue…at that time we lived with my grandmother, and she had a penchant for disposing of things she saw laying around that she didn’t approve of. Somehow she got hold of the Spy vs Spy artwork, and the poster with the autographs, and chucked them. She had no idea of the sentimental value I placed on those items. Bummer.

That was a wonderful story
I too grew up loving mad magazine (National Lampoon) as well. Perfect timing for a pre-adolescent boy, I suppose…
Sorry about the pathos at the end
I had the same thing happen with a lot of classic jazz albums from my family
But the generosity of your aunt, and the man’s generosity was a magical experience: something you still experience and savor