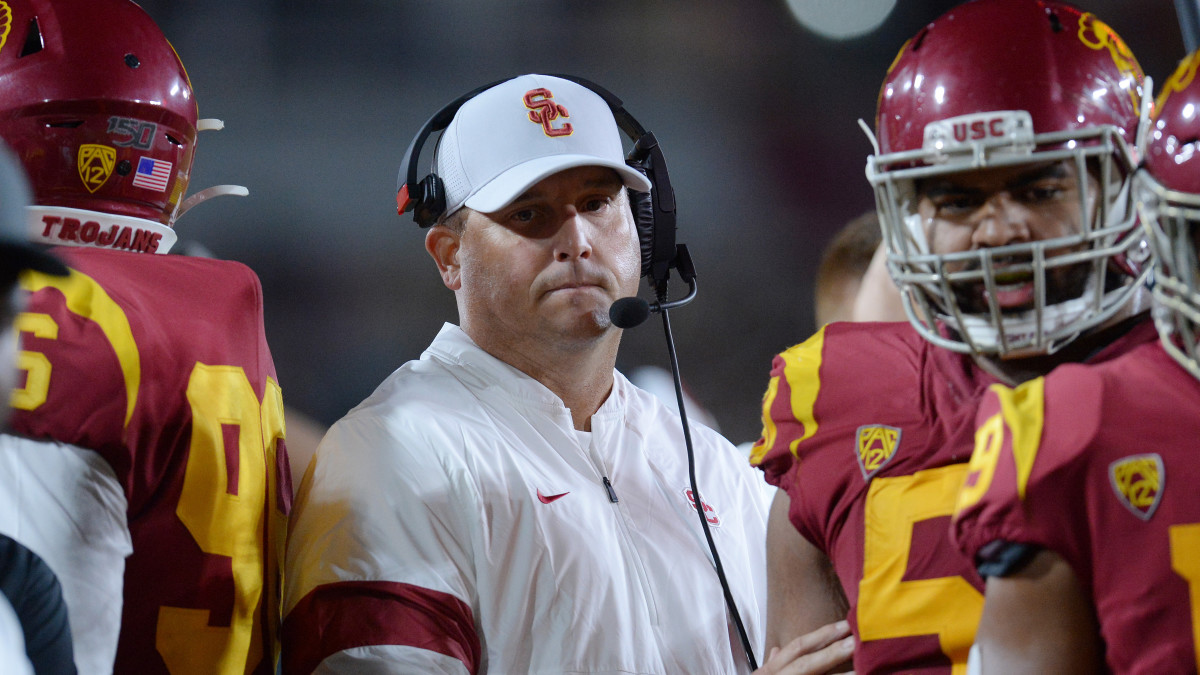 USC continues not to take itself seriously about treating itself like a top-tier program, and fans and recruits have noticed. So why did Mike Bohn give Clay Helton another shot?

It was the South will be Utah and Arizona State battle over the next few years. Herm seems to making some coaching moves. I haven’t looked at his recruiting so this may be a bad take.

The administration at U$C recognized the revolving door of coaches was doing them no favors, and they may as well run with this guy for a while.

The reality is the Trojans have bigger problems than the coach. Unlike Utah and ASU, they haven’t really invested much in their training and athletic facilities over the last 10 years - and that ■■■■ was old when Pete Carroll got there. They are pimping the upgrades to the Mausoleum, but the reality is that facility is hella old and needs almost double the amount being invested to get it back to passable. Many of their other facilities for their other sports teams are suffering similarly.

Never mind the academic scandal and other internal issues at the school that are still boiling. It will take time to fix all of it, and those other issues make football’s win-loss record look sort of passé.

The “Mausoleum” seemed old and awful when I was a kid and watched Bo Jackson and The Raiders in the 1980s with my Dad.

That was because the USOC invested $100 million in renovations for the 1984 Summer Olympics, which knocked the edges off the aging process.

Until the announced renovations came along to get the building ready for the next LA Summer Olympics, bupkiss got spent. It is the only stadium I have been in where the best seat in the house for a traveling fan was at a bar watching the game on TV. The Rose Bowl was not a lot better, but I get it…history.

The truth is, to get the facility ready to 2020 fan standards, it probably needs a couple of billion in upgrades and fixes.

That said…Hell, it’s LA!!! They can probably find the money to fund this in the scraped butter from the popcorn at Magic Johnson’s theater complexes. The entertainment industry could find it on their back lots. Jim Rome could probably roll a donation pitch on this shows and raise a big chunk of it from the clones.

It doesn’t fix the rest of the problems, but it’s a start.

I love being at the Rose Bowl. Getting to and leaving is THE WORST!

If I were SC I would try to move out of the Coliseum to 7 miles away. Saturdays in SoFi Stadium sounds better for the team and recruiting. 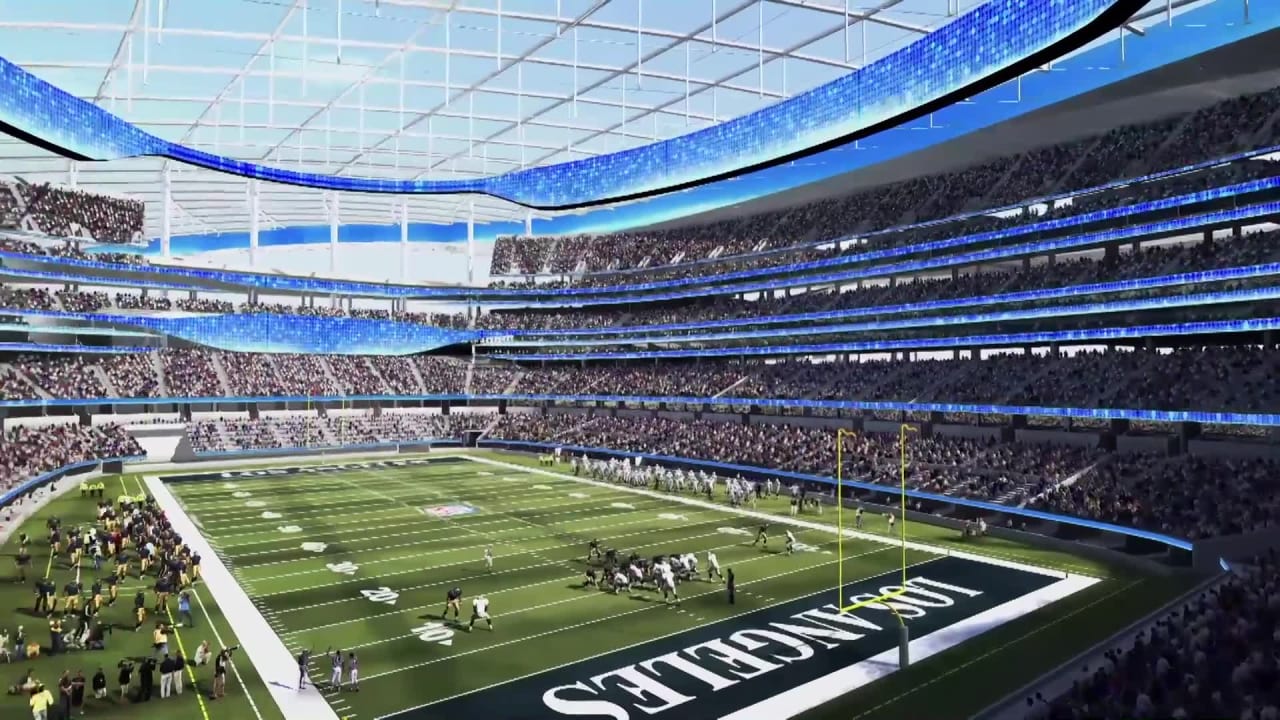 Get an inside look at the construction of SoFi Stadium's Oculus

The Oculus: get an inside look at Los Angeles' construction of the most revolutionary in-game sports entertainment experience with SoFi Stadium.

I agree with Greginslc regarding the revolving door, it would seem if USC allowed Helton more continuitiy then progress would be made. If they hired a new coach tomorrow it would take a season, probably two, to see significant gains. A few days ago my thoughts were if they fire Helton they are seriously greedy, fully enlisted in I want it now attention deficit pop culture.

Regarding the Mausoleum, the recent 200 million dollar refurbishment amounts to what my son described as putting lipstick on a pig. If it would be feasible to placate the historical designation/preservation mandate, keep the peristyle end, competely demolish the rest, replace it with glitzy recruit friendly new.

Also, what kind of institution adorns their stadium with a 30 foot tall replica jersey of a double murderer. Hey, I heard Ted Bundy had a great jump shot.

I think this is accurate. Slovis is a good QB, and as usual they’ve got a lot of talent in other areas. I’m not sure we beat them in SLC.

I see 5 losses on that schedule. Alabama, Notre Dame, Oregon, Utah and either ASU or Washington.

Honestly they don’t lose many to graduation and will return most of the core team.

If Texas hires away Graham Harrell, however, that throws a big wrench into the works.

Also, not sure UW looks all that great. They are retooling next year, and without Chris Petersen.

I think this is accurate. Slovis is a good QB, and as usual they’ve got a lot of talent in other areas. I’m not sure we beat them in SLC.

Slovis will work his way into Heisman contention next year. They will be formidable.

My thoughts as well. He is legit and will give a lot of teams fits moving forward.

Honestly they don’t lose many to graduation and will return most of the core team.

If Texas hires away Graham Harrell, however, that throws a big wrench into the works.

Also, not sure UW looks all that great. They are retooling next year, and without Chris Petersen.

I still see 5. Arizona State is getting better next year and with doubt around Helton it tends to cause problems in a program

Helton is a decent coach and what appears to be a good man. But he will not do with the USC program what most of it’s Alumni and fans expect. He will have a couple more 8-10 win seasons and then be replaced, for all of the same reasons that most want him replaced now. It will simply cost less to let him go and will be more tolerable as the current set of scandals have faded.

The fact that the incoming president is unwilling to hire Meyer, is a testament to her strong desire to clean things up. But she will have a lot of very unhappy alumni/fans blaming her for the lack of program production that they expect.

Meyer would improve the team next year dramatically. He would instantly bring in the best recruiting class in years, and while he would only likely stay for about 5 years, they would win 4 of the next 5 PAC-12 championships and participate in the CFP each year. Helton, won’t do that.

I don’t understand the certainty of some that he has done a mediocre job. They still have a solid recruiting class, and this year he had a great conference season with more than his fair share of injuries and team drama. One of our top 3 teams of all time not only lost to him, but had to win the last game of the regular season to clinch the division.

Sure he has lost some games and struggled in areas I wouldn’t have expected. But, we are seeing in Utah the fruits of sticking with a coach despite struggles (2 5-7 seasons). Utah fans of all people should understand how some consistency with a good coach can pay off long term.

…The fact that the incoming president is unwilling to hire Meyer, is a testament to her strong desire to clean things up.

I’ve heard that and believe that the new president (and AD) probably want to avoid a controversial hire. Do we know for sure that they didn’t reach out to Urban, only to be received less than warmly?

It has been widely reported that the new president vetoed the notion of even discussing the position with Meyer.

I’ve heard that and believe that the new president (and AD) probably want to avoid a controversial hire. Do we know for sure that they didn’t reach out to Urban, only to be received less than warmly?

What I’ve heard from people claiming to have inside knowledge is that there was an internal battle at USC that the president won. Urban’s a great coach, but players’ off-the-field issues seem to follow him everywhere. Because USC is so scandal-ridden right now, that’s the last thing they want to bring in. Helton runs a clean program and they love him for that. Good for him. I’m just saying that he can’t seem to do much with all his 5-star talent, and I hope that continues.