Looks about right. In my case it might be less when it comes to knowing others based on alcohol, parachuting, and playing offensive line.

Thanks for the reminder.

I remember when my dad was in the hospice center the day before he died from pancreatic cancer. There was a Subway next door to the center, and my brother and I walked over there to get some lunch. We’d spent the last two days sitting by our dad’s bedside watching him slowly fade away, knowing that he might pass at any moment.

I’m not sure if the kid making the sandwiches was intentionally being really slow, or it just felt that way because I was horrified we’d be standing at the Subway counter when dad passed. I snapped at him a bit, telling him to “hurry it up”. As we were walking out, I heard him say to his co-worker, “Man, that guy was a total dick.”.

That happened nearly 4 years ago, but it has stuck in my mind ever since as an example of why I need to be kind to others. That kid had no literally idea what I was going through at that moment or what prompted my reaction to him, yet he was (justifiably) left with the impression that I was a total a**hole.

I try to keep that in mind when judging people’s reactions. Some days I do better at that than others, but I’m very guilty of making snap judgements too often. It’s a shortcoming that I know I need to work on.

I’ve always liked the quote: “We judge ourselves by our intentions, and judge others on their actions.”

reminds me of a true story out of NYC I read years ago.

A Young father was on the subway with his two small kids. The father sat in his seat their while the two kids were climbing all over the seats loudly acting up. The father just sat there ignoring his misbehaving kids, much to the disgust of several other riders on the subway car.

Finally, a lady came forward and asked the man if he could use some help because he looked as if he had his hands full watching both kids?

The man said “yes, thank you” with tears in his eyes. “I’m just returning from the hospital after the passing of my wife”

That story has always stuck with me as a reminder to be nice to others and try to quickly forgive and forget the actions of strangers.

Of similar strain; a long time ago I decided I wanted to bike up emigration, Millcreek, big and little cottonwood canyons in one ride, which is a major slog for most any rider.

As I started out taking an easy pace along Wasatch on my way to little cottonwood a group of guys came by and made a joke about my pace, saying, “You can’t wear a club kit and ride that slow”. I was conserving energy because I knew I had a long day ahead.

I did emigration last as it was the easiest canyon but I was completely cooked. As I struggled near the top two guys easily passed me and I heard one guy say to the other, “somebody is having a rough day” and they both started laughing.

Since then when I ride and pass somebody I think is going too slow, or when I see someone in real life struggling I remind myself, “Dont judge them on that, you have no idea where they are going or where they have been…”

So now I ask them and make fun of them on a case by case basis.

It’s so hard to know sometimes that someone is in trouble.

He was the godson of Olympic track and field legend Carl Lewis. 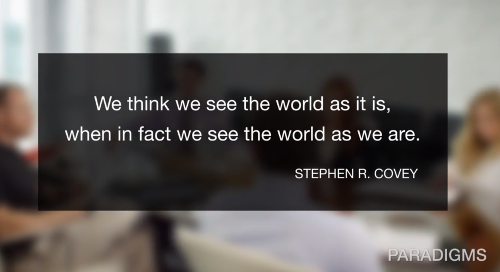 In this video from The 7 Habits of Highly Effective People work session, Stephen R. Covey explains the significance of paradigms and how they affect the way we behave and the results we achieve.

I sell lots of 7 Habits training, and that’s the video that consistently hits home the hardest, even in rooms full of cranky federal government bureaucrats.

I sell lots of 7 Habits training, and that’s the video that consistently hits home the hardest, even in rooms full of cranky federal government bureaucrats.

Once upon a time I was a Seven Habits trainer and yes, that was the story that everyone I was training “got.” It’s a great story.