Like many things in modern society and culture, collegiate athletics has been corrupted and perverted well outside the original meaning and intent. As I stated in a previous post under a message thread LAUte initiated titled, The transfer portal + NIL + no serious rules = chaos, the term student athlete is a misnomer, at least for men’s D-I football and basketball, it would be more properly called professional athlete - student. How can one argue otherwise when a freshman quarterback receives $900,000 compensation before playing one minute of college football, a made up pretend game. The entire enterprise has grown too big. It’s a little surprising to me the proportion of people who favor this transformation. Be careful what you wish for. My position correlates somewhat to my lack of affinity for much of current pop culture. Some of us have zero interest in today’s NFL, NBA, NHL, MLB.

The Utes appearance in the Rose Bowl came at a threshold, where the changes morphing over decades were undeniably passing a significant milestone. Which was another reason I was hoping for their victory.

The following book quote is by a mother whose son, a park service ranger, went missing in the backcountry of Kings Canyon National Park.

“There are times occasionally in life when great changes occur, and then nothing is ever the same again. Things never stay just the same, any time. Change seems to be one of the few certainties in life. Just as well. But while we look forward eagerly to what is to come, we can thoughtfully appreciate the good that has been and what we have at the moment.” – Esther Morgenson, The Last Season by Eric Blehm

collegiate athletics has been corrupted and perverted well outside the original meaning and intent.

The original meaning and intent was the corruption and perversion.

Powerful and profitable entities now have to allow their employees to make money in a fair and open market, as opposed to the previous manipulated market that was over regulated in favor of the employer. Regulations that made many student athletes beholden to the powerful entities because they had no other means of obtaining a higher education. For years, many student athletes and their families lived in poverty while the industry generated billions in revenue, that was the corruption, the perversion. I’m having a real hard time seeing the correction, the end of exploitation of the student athlete, as the bad part of this scenario.

Student Athletes are no longer some strange class of free Americans restricted from legal financial opportunities, they now have freedom on par with any other student. How much longer are we suppose to pretend like that’s a bad thing?

@BoardGeniuses
Credible sources have disclosed to MBG that #Auburn offered Caleb Williams $1 million behind the scenes to play for the Tigers. #Oklahoma is also working on trying to put together a "large package" to offer to Williams. https://t.co/6NuLpC8aDx 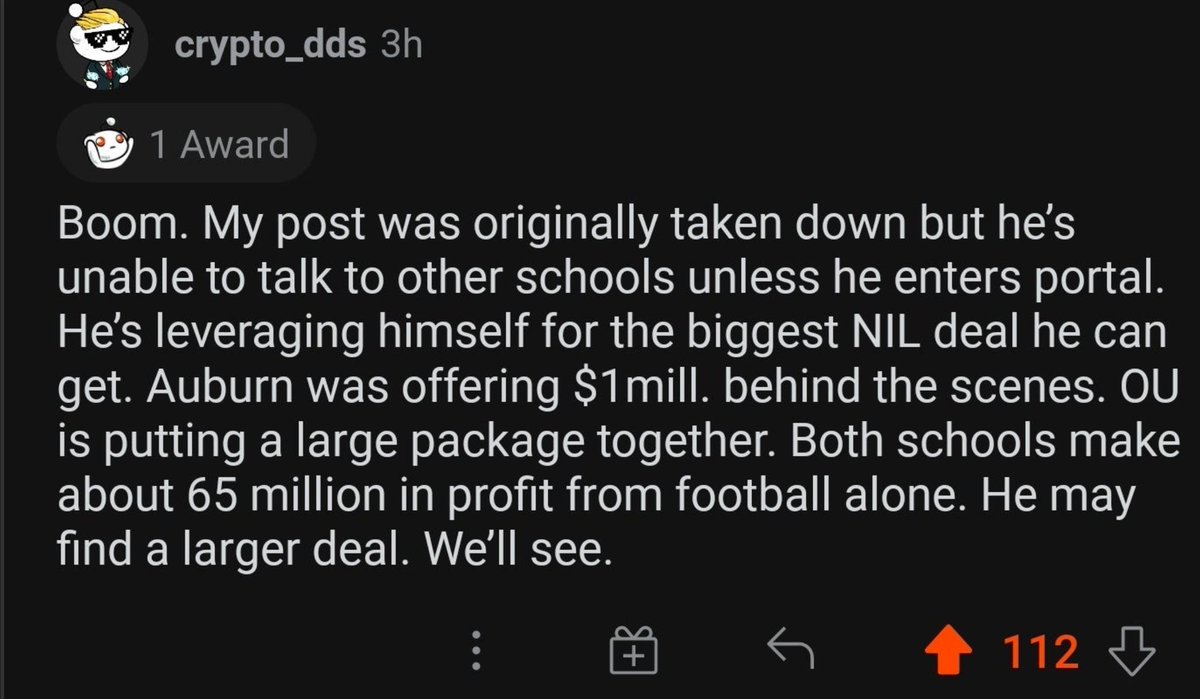 how can you not worry when there are rumors like this going around?

Those type of rumors and shenanigans are not new or unique to the changes made by NIL or the transfer portal. I see no need to be any more worried than we should have already been.