@PicsUtah. We lost this Utes legend this morning. Bill Marcroft is an absolute Ute Legend. 😪 https://t.co/9pLmSQcJGz 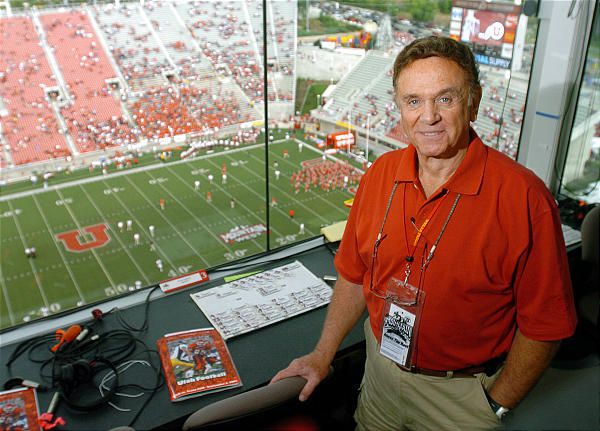 Wow, hadn’t heard of his passing. Agree, he was a true Ute. RIP.

Damn, I remember listening to him call games LONG ago. He was always the voice of the Utes to me.

Thank you for posting. Loved the guy.

Bill was awesome, he was like our own version of Harry Carey.

He took his job seriously, but in conveying his enthusiasm for the Utes, he was always laughing, which used to piss some people off, especially if the team wasn’t doing that great.

His funny little (usually temporary) idiosyncrasies were fun to deal with, mostly because it used to drive my dad nuts.

My favorite Marcroft game was in his last season, the 2004 Fiesta Bowl year in a game at Laramie where they lost half the power to the stadium, which caused a long delay while they tried to figure out what to do. Eventually Channel 4 bailed on the game and started showing a Harry Potter movie, IIRC.

So Ute fans had to listen to Marcroft, and it was just like the old days before every game was on TV. We kept checking back on Channel 4 to see if they were to going to switch back to the game, and they didn’t.

Marcroft, getting that feedback, told Ute fans on the radio that if they had a complaint about the TV situation, Wesley Ruff was the sports director at Channel 4, and then he gave out Wesley’s phone number on the air.

On the news later, Ruff was pretty angry, declaring with a red face that “yes, both of my parents are married… to each other”, explaining they couldn’t terminate the broadcast of the movie once they started it.

Classic Marcroft - perfect way to go cap a great career, and we finished it off in Tempe, the first BCS busters, a perfect season.

Sitting on the bus with fellow Ute fans for the NCAA Finals and Marcroft popped his head into the bus to say hi. He leaves and a guy starts joking about Marcroft calling games and imitates him, “He’s broken through! Is anyone going to catch him? He’s on the 40, the 30, the 20, the 10 and he’s tackled DOWN the the 25 yard line…”

I’ve always wanted to watch the Fiesta Bowl with Bill Marcroft’s call dubbed over the top because it must have been such a thrill for him to have seen it and been able to work it. There must have been a huge amount of joy he experienced that night. He’d earned it.

Marcroft was also did the local sports newscast on KUTV at 10pm, he was fantastic, I looked forward to watching every night.

I just stumbled upon KUTV’s newscast tonight and David James showed highlights of Washington vs Detroit and made no mention of Alex Smith. None. I mean, it was Alex’ first start after a comeback that was documented in a prime time ESPN special, and Alex threw over 50 passes for nearly 400 yards and our local sports reporter makes no mention of it, shows Detroit highlights.

We are losing great people and not replacing them.

Yeah, but what did Taysom “Gimmick” Hill do today?

His interview style with Rick Majerus was awesome. I swear he never asked a question, just made a statement and then said “Huh?”. Like “Van Horn had 4 three pointers tonight, huh?”

Then Majerus would barely acknowledge what he said and go off on someones defense, weak picks, talk about where he was going to eat, or make a joke.

With expansion of cable/satellite over the years and most of the games becoming available on TV, listening on the radio became rare. But during the game in chilly Wyoming (where use of heaters in the concessions stands blew out their power supply) we all turned to the radio and the chat room on this site was packed that night (where we were all angry to find the second half was airing live to Utah fans in other states while our local channel was showing Harry Potter) Channel 4 later showed what they could (during the first half they weren’t even able to tape it so we just got the second half)

Will fondly miss Bill. He was a huge part of the Utah family for a very long time.

A fitting tribute in the Utefans tradition: Maybe one of the mods could dig through the archives and repost the hilarious story about someone walking in on Marcroft in the bathroom. I think it was posted by Senioritis, but I am not 100% sure.

I loved that Bill had such a good memory about Ute games. He could go toe to toe with any TDS fan, like Paul James, on some of the TV sports shows.

Because he called many of the games, he could recall details of many great games and plays and tell some wonderful stories. We need another Marcroft. RIP Bill.

Very sad today. I’ll miss seeing him at games and events. Senioritis’s story about him will always make me laugh. RIP Bill.