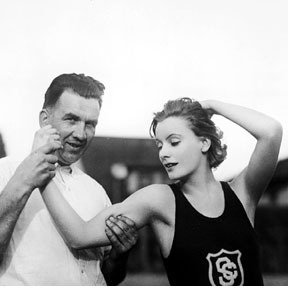 I actually like Helton, but good luck with that.

Can’t blame him for preparing though, just in case.

He’s a mediocre coach, so in my view I hope he stays at SC for a long time.

I wish he wouldn’t say crazy things. They probably don’t need to fire him if they get him 5150’d.

Time to take care of business and totally screw over U$C by winning it all.

That should put their alums and boosters in another row.

Meh. They’re done for the regular season, if my team were in a similar position I’d want my coach to be preparing for the CCG just in case. Better to overprepare than to have Colorado pull off a major upset and then suddenly have to start your game prep.

If you’re referring to Helton I would agree with you.

That’s not what’s being discussed here in LA.

That’s not what’s being discussed here in LA.

I’ve heard that some trustees like him because he’s scandal-free and likely to stay that way. USC is tired of being in the middle of fraud-sex-drugs-drama. Something tells me that the “let’s stay clean” view won’t prevail, however.

" Apparently the new University President and new AD “think he did a good job with difficult circumstances” and are close to going public with a show of support. Also, Urban apparently is a nonstarter with the University President, but she is increasingly comfortable that Helton is the type of front man the University wants… after the admissions scandal and Kiffin/Sark debacles they think that “just winning” is maybe not as important as changing the culture and clarifying the brand…"

They would love to pry Whitt out of Utah, but I don’t think that’s gonna happen.

I could be wrong but Whit really has no reason to go into a situation like USC with what he has here, particularly as he nears the end of his career. 10 years ago? Maybe.

I mean, it would be like jumping from the frying pan to the fire; and for what, more millions?
He must be set.

Seriously, who would want to coach for those boosters and that fanbase?