Utah 34 UFl 31, with us winning on a game winning field goal. 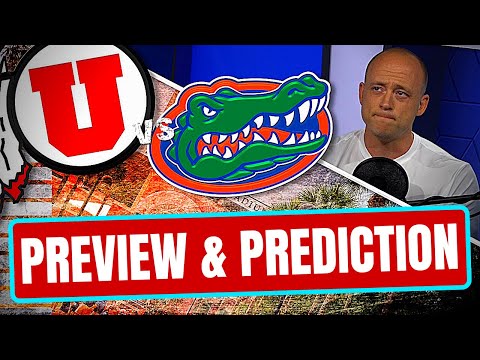 Can I just say that it’s crazy to think that Utah is the team that is representing the Pac in an away game against Florida?! As my name suggests, I’ve been heavily invested in Utah since I was accepted in 2008 and I can’t really believe how far this program has come. It’s really impressive and I hope Utah pulls it off. 33-27. Go Utes!

You’ve seen a fair amount of success for our Utes. Hope you don’t the trauma that many of us “old timers” have, going pre-McBride years.

That would be WAY COOL. Hopefully cool enough to mitigate some of that dreaded “heat and humidity”. Lolz

Right now, forecast is for 60-70% showers and thunderstorms for Saturday. Possible wet and sloppy conditions. Hopefully no delays due to lightening.

Saturday Night: Showers likely and possibly a thunderstorm before 8pm, then a slight chance of showers and thunderstorms between 8pm and 2am. Partly cloudy, with a low around 72. East wind 3 to 7 mph. Chance of precipitation is 60%.

Pretty excited about this game. Out here in SEC land, I have some Gator friends, so a win by our guys would be excellent.

As some of you might recall, I never pick against the Utes. I’m going with 41-24. Utes win convincingly, and the Gators get their last touchdown in garbage time.

That was a disappointing ending to another great game. We have coaching decisions to question - never chase points until you absolutely need to. Referee decisions to question - was Cam in the end zone? Unfortunate bounces - that fumble by the Florida guy on their last drive couldn’t have bounced better for him. Did the lack of live work result in the defense not tackling well? I’m sure there are a bunch of other things. Hard to fault the effort. This still can be a great season.

It had the Game 1 rust like you expect, we struggled with Richardson, Cam was off on a lot of throws. (Only saw one angle on the last throw, but it looked like he stared down Kincaid, but had Vele? break open)

ST was very solid, defense settled down after the initial adrenaline rush.

Agree, a ton to still play for, not an embarrassing beat down, we have a week to pull ourselves up and get back on the horse. Florida may have more overall talent than we’ll see. Richardson may be better (healthier) than Cam Newton, right now.

First game, but SDSU got handled at home by U of A, ASU looked pretty good against NAU (as expected).

This week we need to honor the process, get bent out of shape and start climbing the polls against SUU. Different challenge, get more of the offense involved, make the Game 1 adjustments on defense.

I will say that the swamp is a legitimately hostile environment. It was as loud as any venue I’ve been to. Probably the loudest in college football or right near the top. There may have been a little home cooking here and there that didn’t help either. Plenty of douchebag Florida fans but a number were complimentary about how tough Utah is and how well we traveled. Good experience. I could see an 11-1 season ahead quite easily. I don’t think Utah will face another QB of that caliber nor quite as hostile an environment. Go Utes!

Look I know you all hate BYU fans. But my perception, The Utes will still likely win 11+ games this season.

You got a solid defense. Your Running backs are all-star with Micah Bernard being more than just a running back. TEs look to be great blocking, but also the teams best receivers. Cam Rising is very mobile, I just think Cam’s arm is what will hold this team back from being elite. He puts to much air under the ball and he telegraphs his passes.

Given how slow and flat this team has come out and played in early season games over the last 5 years, this team (though rusty) came out and played with a purpose. Yes, we lost. That said, this team could run the table on the remainder of the season. They will clean up the miscues and get back on track. Having a tuneup game next Saturday will get them ready to drop a beat down on SDSU. Let’s hope we never have our punter get a punt blocked by one of our own guys ala ‘Zona.